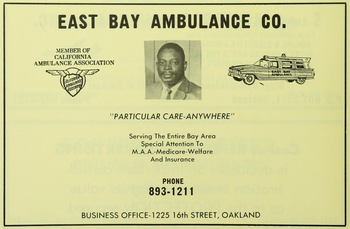 In 1963, Henry Winston applied to run an additional station at 8818 E.14th St. (now International). 5 According to his obituary, Winston eventually expanded the business to 5 stations. 6 An application to buy an additional ambulance in 1965 caused a rift in the council, with some supporting it, and others saying the city already had 25 ambulance permits and only 17 ambulances. 7

Albert Dulan worked as a driver for East Bay Ambulance. 3