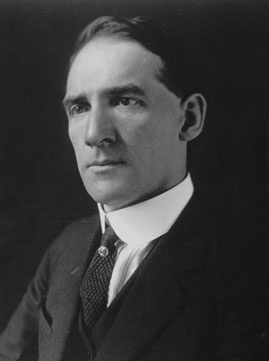 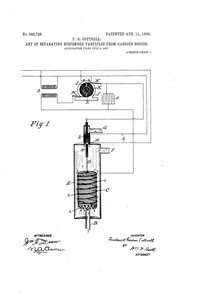 Cottrell was born in Oakland in 1877. He graduated from high school at age 16, then graduated from UC Berkeley in 3 years. An acquaintance said, “He read textbooks like novels.” 1 After graduating, he taught chemistry at Oakland High School, saving his salary to pay for higher education.

After returning to California, Cottrell taught chemistry at UC Berkeley. Cottrell did some consulting for DuPont to reduce air pollution, and developed a working electrostatic precipitator in 1906. He was granted patent No. 895,729 on August 11, 1908. 1

Frederick was born in Oakland on January 10, 1877, to Henry Cottrell and Cynthia Lakey Durfee (Cottrell). NB: Cynthia's name is spelled Synthia in some records. The Cottrell's first child, Paul Cottrell (1872–1873) died in infancy. Their second child, Henry Durfee Cottrell (1869–?), was born in New York, before the Cottrells moved to Oakland.

Cottrell married Jessie Mae Fulton on January 1, 1904. Frederick and Jessie had no children.

In 1912, Cottrell and Charles Walcott (then secretary of the Smithsonian Institution) created the Research Corporation. It took the income from Cottrell's patents, and the patents of similarly-minded inventors, and distributed it as needed to university researchers in the physical sciences. It made its first grant in 1918, and over the years has helped fund Robert Goddard's research in rockets, Ernest Lawrence's invention of the cyclotron, and Robert Van de Graaff's invention of the Van de Graaff generator. Over the years, it has funded over 18,000 scientists, who have been awarded more than 750 patents and 40 Nobel Prizes. 3

After living in Washington, D.C., for many years, the Cottrells were living in Palo Alto, CA. In November, 1948, Frederick was attending a National Academy of Sciences session on the UC Berkeley campus when he collapsed. He was dead on arrival at Cowell Hospital. Frederick and Jessie are buried in Mountain View Cemetery.