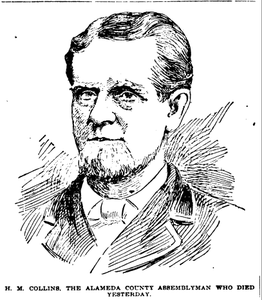 In his time on City Council, Collins was known for his work on "reforming" the liquor license system. Collins was chosen as President of the Council in 1890.5

In 1889, Collins traveled East and studied some water systems. He concluded that he couldn't really learn anything from other cities and that "Oakland water, with all its faults, is better than the water of some of the large cities of the East."7

In 1894 he won a seat on the (state?) Assembly.2 The counting went on for weeks, and officially, Collins lost the election by one vote, but blind witnesses were brought to court to testify that they would have voted for Collins if they had been sworn in properly.3

Collins lived at 1823 8th Street. He was married and had 5 children.

He is not buried at Mountain View Cemetery; his body is in Placerville.4