The Half Moon Cafe was a club and restaurant at 14th Street and Cypress, opening in 1938. It had a restaurant, soda fountain and dance floor. 1

The owners were Joe Catera and Peter Boscacci. The building was constructed by Joe's father, Louis Catera. 1

George James was the bartender in 1942. He had 42 years of bar-tending experience, including at the Saddle Rock. 3

In 1943, there was a large burglary, with a large amount of liquor, money and food taken. 2

The building was moved one block west when the Cypress Structure was built, and is now at the northeast corner of 14th Street and Center Street, and is the home to the Sigma Iota chapter of Omega Psi Phi black fraternity. 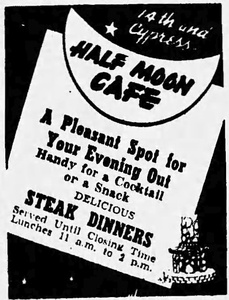