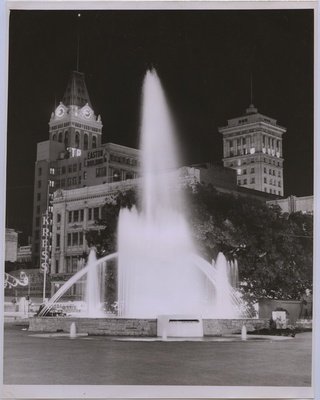 The Hassler Memorial Fountain was a fountain in city hall plaza, built in 1956. It was built in memory of John F. Hassler, who had been city manager for 18 years. The fountain had "dancing jets" of water and colored lights, which could be coordinated to music. 5

Ground was broken for the project in July, 2 and it was unveiled in November 1956. 3 By March 1957, emergency funding was provided to build a flagstone apron around the fountain, because the spray was drowning the lawn and seeping onto the sidewalk. 4

The fountain was the victim of pranksters more than once, who put soap in the fountain creating mountains of foam. 6

In 1964, the city had to install a special drain because sump beneath the fountain...filled with water and shorted out the electrical system. 7