John Braddock Watson (“JBW”) sounds like one of those colorful, flamboyant Gold Rush-era pioneers, someone who must have a memorial plaque or bench somewhere. He had a street - Watson Avenue - but that was renamed years ago. His grave is in Plot #1 at Mountain View Cemetery, but it isn't marked. I assume the lack of memorials has to do with his career as a second-banana, serving in the shadow of a much brighter star, Oakland's notorious, nefarious first mayor, Horace Walpole Carpentier.

JBW was born in August 1826 in the town of Providence, northwestern Saratoga County, New York. His next-elder brother was my 3rd Great-Grandfather, Rev. Elisha Watson. In 1850, JBW was enumerated in two separate households: his parents' farm, and the Hoyt farm belonging to his eldest brother George's in-laws.1 But by as soon as 1852 he had an entirely new life: he had shipped out to Panama, trekked over the isthmus, and steamed his way north up the West Coast, landing in Sacramento. He worked there for a time, and managed to meet fellow New Yorker Phidelia "Hettie" Scott. In short order, the two were married and moved south to Oakland, a seedling of a town on San Francisco Bay. There they were eventually joined by two of JBW's younger brothers - James William Watson, and Benedict Arnold Clark Watson (long name, longer story). JBW's home was at 1351 Fourth Avenue; the brothers lived on East Seventeenth Street, at Nos. 228 and 262 - a plat of land owned by JBW, according to the map below - in the pink, directly below blue-shaded Peralta Heights. 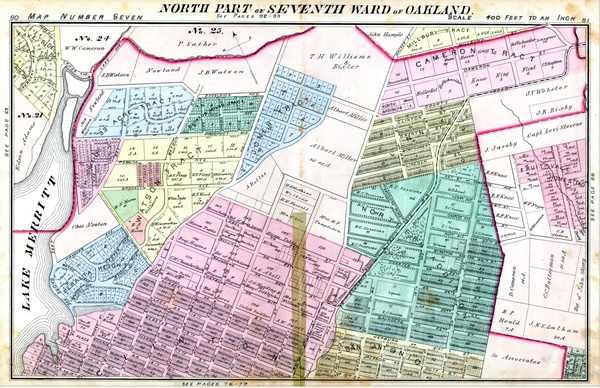 According to most sources, soon after his arrival, JBW found himself in charge of the construction of the original bridge at 12th Street. In that capacity, he was introduced to Horace Carpentier, who had just taken over financial responsibility for the bridge project. Horace had a knack for creating jobs for the Watsons to take on. He arranged for the bridge to be a toll bridge, so he needed toll-takers - and all three brothers took their turn in that position. (As an aside, the general population didn't think much of toll bridges - consequently, toll-takers routinely found themselves being shot at!) 2

JBW probably had no more than a village school education, but he was clearly a clever man. He was a carpenter and tanner, by trade, but he served Carpentier as a lawyer, business manager, real estate broker, and bodyguard! Plus he was an avid rancher and horse breeder. Most of his personal fortune likely came from the piece-meal sale of some very nice property he somehow came to own. From Lake Merritt to Park Blvd., down to East Twentieth, most of that hill was The Watson Tract, bisected by Watson Avenue.  (The pale yellow section, left of center, in the map above.) The income from those properties kept the family in good stead for many years.

It was in a similar real estate-related role that he made his most notorious mark on Oakland history. In the final coup de grace in Horace Carpentier's plan to monopolize the Oakland waterfront, Carpentier's aptly-named concern, the Oakland Waterfront Company, bought the final parcel(s) from JBW, who was acting both as the seller AND as attorney for the buyer! 2

Some of my favorite descriptions of my 3rd Grand Uncle: 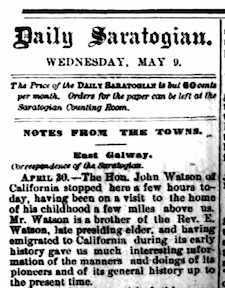 In April 1877 he managed a rather triumphal return to Saratoga County, which occasion did not go unnoticed by local papers. "The manners and doings of [California's] pioneers", indeed!

Not surprisingly JBW ran himself way too hard, often to the point of exhaustion. His bravado came at a price. From his obituary:

"Mr. Watson has been in very poor health for the past two years, and he has been in the Mount Shasta region a great deal for a year past, making occasional trips to Oakland to see his family. He was suffering from overwork and the effect of great care and responsibility, but his life in the northern counties seemed to be benefiting his health. He had been doing very little business of late, beyond taking care of his own property. Two months ago [May 1887] he left for his last trip to Siskiyou county. He was then very weak and had to be carried from the train to the hotel. He seemed to recover, however, and a week ago his friend, Captain B. D. Boswell, who had been with him, returned to this city. Yesterday Captain Boswell received a telegram asking his immediate return to attend Mr. Watson, who was much worse. The brief announcement this morning shows the result of the change for the worse." 3

John Braddock Watson died in the town of Sissons, now the town of Mount Shasta, the morning of July 26, 1887. He was not quite 61 years old. 3

Intriguing Postscript: I don't think that meeting between Carpentier and JBW at the 12th Street Bridge site was their first. I can't actually prove this theory, but it seems impossible they didn't know each other back in Providence. Horace was perhaps two years older than John, and their families owned adjacent farms! 4 My big question is, Was it Carpentier's suggestion that JBW, and perhaps all his brothers, come to Oakland? Maybe we'll never know. But I'm glad they did.

Some years later, JBW's son Horace Carpentier Watson had this monument erected in the Watson's section of Plot #1, Mountain View Cemetery. JBW and Hettie's graves remain unmarked, but it gives me a place to visit and pay my familial respects. 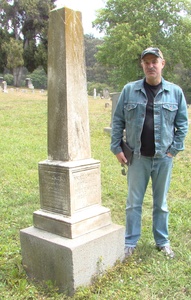