Liminal Art: What is it? 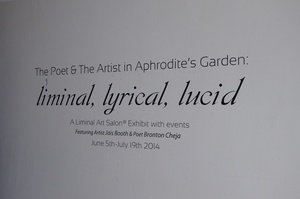 "The term liminal has initially been used historically as a phase in the Hero’s Journey, and refers to the phase after the seeker has left the familiar context of social life and before attaining the spiritual insight which reveals a vaster realm of understanding which is then brought back to the community. Thus it has been referred to as betwixt and between, i.e. a place of indeterminacy and unknowingness which tests the seekers’ determination and courage. 1

The Hero’s Journey is a mythical one, and embodies as prototype an initiation into the liminal realm. The hero enters the indeterminate potency of the inner world, where the old rules fall away, and his location is darkness, the indeterminate, broken forms, chaos, the womb, the seed. In that putrid blackness he meets his varied selves, his daemons, the personas of himself that have been hidden. The hero must go to the bottom of himself. (This applies to both genders.) S/He has to find the buried treasure: the knowledge of himself. Herein is the new creation, the new person, to be born. It is from that place that begets liminal artworks. Only then does the hero/artist come back into the social world and share his wisdom and how to make that journey.

An original use of the term in the context of art can be seen in the seminal book on liminal art, Myth, Magic, Mystery: the Liminal in Art 2, where liminal does not refer to the betwixt and between, but to the vaster state of consciousness that is revealed when the seeker passes through the indeterminate. Thus, while historically it is a stage in an initiation myth, in the creation of art it is the place of spiritual insight. It is not in-between, but Beyond. The in-between is the ritual itself, which is the method and structure to bring one to the spiritual realms, the beyond. Liminal Art surpasses craft and comes out of the supra-rational realm, the source of original creativity. 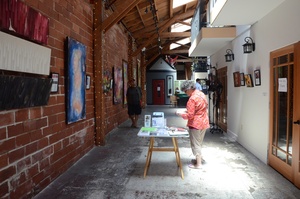 The liminal is a threshold, i.e. a threshold of consciousness. The threshold being crossed is between ordinary, mundane consciousness and the higher vibrational dimensions of being. Liminal art and poetry is inner-driven expression seeded with spirit, that by its nature manifests with a transcendent quality. This spirit expresses itself in every form of art, its transcendent essence being the sole determinate of a liminal work. A liminal artist/creator crosses the threshold of ordinary mental reality, entering the realms where myth, spirit, wisdom and enchantment arise, to create a work from those deeper, more primal, more encompassing realities. 2

The purpose of liminal art is not only to serve the artist, but to become a messenger of the transformative power of art for others, stimulate and deepen their own imagination, and evoke the liminal state in the observer. Liminal is not a style. Liminal refers to the depth and realization of the mystical/mythical realms, which can be rendered in any style. The liminal work is form as a manifestation of essence. The liminal artist creates a new world to view. 2

Poetry and art that comes from the liminal serves as a doorway to the ineffable. It is a cryptic map, a cry, a journey into mayhem, myth, magic, and mystery." 2

© Bronton Cheja 2005. Material is copyrighted. Contact author at [email protected] for permission to quote. It is posted here with the permission of the author.