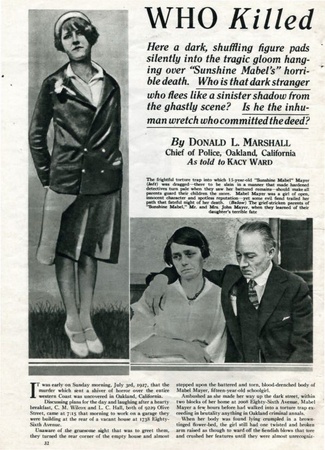 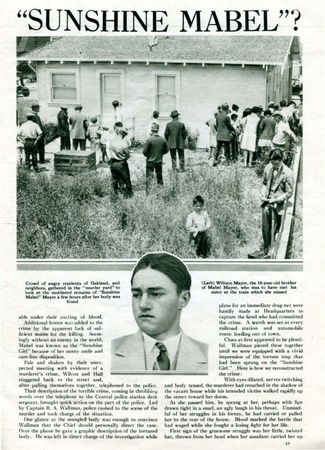 Mabel was due home at 2008 - 86th Avenue the evening of Saturday, July 2nd. Her older brother, William Mayer, went to meet the train she was supposed to be on, but she didn't arrive. Her father, John Mayer, then went to meet the later trains, but she didn't arrive on those, either. The next morning, her bloodied body was found in the backyard of a vacant house at 1738 - 85th Avenue, by two workmen who had arrived to build a garage. Clues were gathered (including one clear bloody fingerprint on Mabel's purse), neighbors interviewed, stories checked, but a month later, a coroner's jury was unable to determine who killed her and announced it as "a party or parties unknown." 4

Over the next months and years, various people were questioned about Mabel's murder while they were investigated for other crimes. In 1929, David Barnett was convicted of child stealing and sentenced to 20 years at Folsom, and a neighbor of the Mayer's, Mrs C.O. Smith, IDed Barnett as the man she had seen arguing with Mabel near her house on 85th Avenue. But Barnett denied it, and Barnett's wife said he had an alibi for the time period. 5 The identification was made by moonlight and several years after the murder, so it is of questionable accuracy, but he was also IDed by Gordon Pierce, a policeman. The Tribune article helpfully describes him as being IDed as the "mystery friend" of Mabel. 6 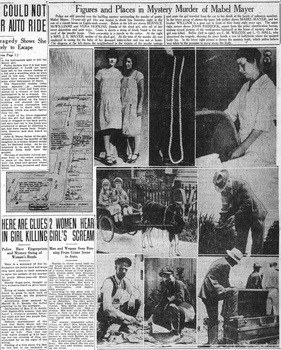 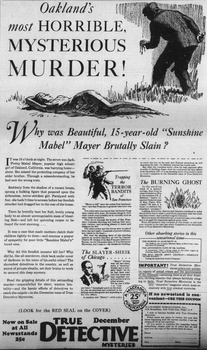 Mabel was buried in Evergreen Cemetery, where she shares a grave with her parents. Over the years, her murder has inspired magazine articles, chapters in books, an episode of a podcast, and even a small website, mabelmayer.com.