Oaklandish was founded in 2000 as "a covert street art campaign designed to illuminate local history and the unique cultural legacy existing here in 'the Town.' The first project was a digital slideshow featuring images of 130 local legends – projected on to the walls of architectural landmarks in the downtown area."3 Many people attended the outdoor movie screenings known as "Liberation Drive-ins"4 or the annual Radio Regattas. Oaklandish founders Jeff Hull and Refa1 suffered a split in 2006, bringing the popular symbol of the "rooted" oak tree into an ownership dispute.5 The Oaklandish "rig" can often be seen hawking Oaklandish goods on the corner of Piedmont Avenue and Pleasant Valley and at various farmer's markets.

Oaklandish products feature designs that Oakland residents understand: giraffes like those painted on freeway pillars, lots of "hella" jokes, BART lines in the shape of the Oaklandish tree, A's shirts with emphasis on keeping the A's in Oakland, etc. Angela Tsay seems to have spread this motif into the company there there (as in Gertrude Stein), which features hyperlocal clothing in other places sharing Oakland's pride of place.

On June 10, 2013, Oaklandish was recognized as the "Small Business of the Year" by the California State Legislature.6

In 2014 Oaklandish opened a second retail location on Fruitvale by MacArthur in Dimond.

Oaklandish was the recipient of the East Bay Express Best Locally Produced Goods Readers' Poll Award in 2014 and 2015. 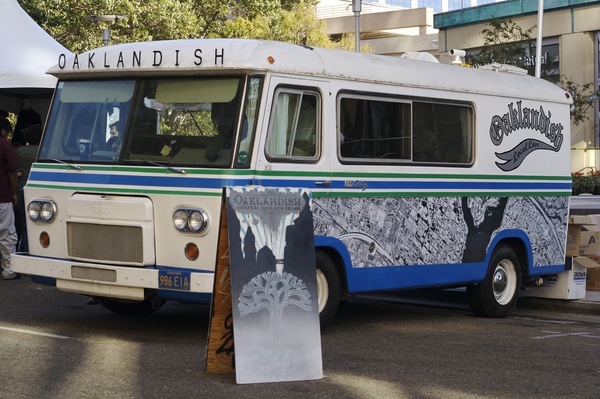