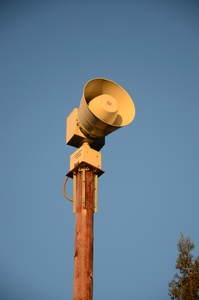 warning siren
photo CC SA-BY from Our OaklandThere are emergency sirens in Oakland. The sirens are tested the first Wednesday of the month at noon. But...

More information about the sirens is at the links below (current March 2021):

The sirens are tested the first Wednesday of the month at noon. If you hear a siren at another time, you should tune into local emergency broadcast news stations KGO, KCBS, KNBR or the city’s 530 AM radio. [Note - They just went off Friday 02/03/2017 at noon - confirmed from Oakland Police department that this was a test].

The sirens were funded by a 1992 bond to have a coordinated early warning system in case of fire. In 2003 Alameda, San Leandro and Oakland launched the "Corridor of Safety" to alert residents in the case of a disaster. They developed a "Alerting and Warning Siren System" to alert and inform the public and to train them to follow the "Shelter, Shut and Listen" system. The system started February 5th, 2003. As of 2003, there were 27 sirens in Oakland.

In January, 2017, they began testing the sirens as part of a citywide upgrade. Until the upgrade is complete, people in affected areas will be warned by a reverse 911 system if needed. 1

A full-system test of the City of Oakland’s Emergency Sirens is planned for noon, Friday, February 10. 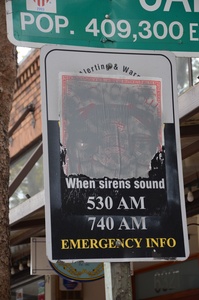