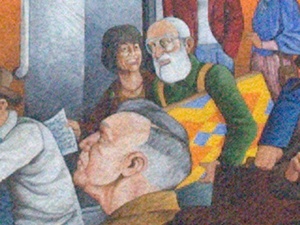 Taylor Fitzpatrick (December 30, 1924 – February 20, 1992) was an artist, noted for his unusual use of color. He was pictured in the Key Route Plaza mural along with his wife, Susan Svendsgaard.

Fitzpatrick's paintings were often abstract, and placed colors together in unusual ways. "Fitzpatrick's secret is, color. He has some highly distinctive theories about color juxtapositions which, among other things, produce such uncanny effects as causing a painting to all but disappear." 1

In the mural, Fitzpatrick is carrying one of his paintings, similar to #7108. Svendsgaard was a music teacher, and is carrying a piece of sheet music.