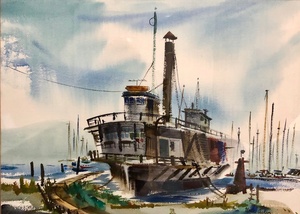 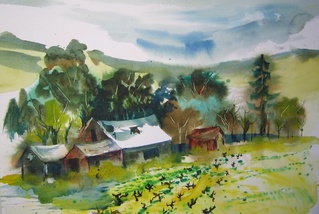 She was born August 3, 1912 in Grand Rapids, Michigan to William H. and Julia Jaeger Kelly. She moved with her family to San Francisco, California as a child. She attended Lowell High School in San Francisco and was the Vice-President of her Junior class.

Una went on to graduate from Mills College of Oakland in 1935 where she received her bachelor's degree in Fine Arts. Actively involved in student activities, she was the art editor of the yearbook for four years, the Vice-President of her sophomore class, head of the Studio Club, and on the Executive Board.

Una met her future husband, Benjamin Rosell Aiken, Jr. of Oakland at a school dance and married him in 1937. Married for 59 years, their three children, Benjamin III, Lionel, and Charles were raised in the Oakland Hills at the family home at 5540 Maxwelton Road.

When Ben was serving in the Navy during WWII, Una doted on her children, and enjoyed the company of her sister, Luciene. Una was actively involved in the Mills College Alumni Association and devoted hundreds of volunteer hours to the college's "Bargain Box" store on Fruitvale Avenue. Her love of arts continued throughout her life with much of her time devoted to painting San Francisco Bay Area architecture and landscapes.

She and her husband shared a devotion to home which led to the designing, building and furnishing of dollhouses. In later years, Ben and Una traveled throughout the world in the company of good friends enjoying the arts and culture of other countries.

Una was preceded in death by her husband Ben, sister Luciene, and son Ben. At the time of her passing, Una was survived by her sons, Lionel and Charles; grandchildren Kelly, Benjamin and Alexandria, and great grandchildren, Emelia and Gabriel. 1