The History of Pawtucket, RI 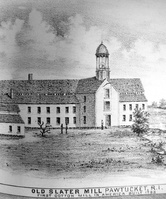 Pawtucket's most noted place in American history comes from our famous Samuel Slater and his Slater Mill. Built in 1793 on the Falls of the Blackstone River, the mill was the first commercially successful cotton-spinning mill with a fully mechanized power system in America. 1

"lived and roamed with savage independence over her wooded hills, through her verdant valleys, and along the banks of her crystal streams. These, and adjacent tribes, formed a numerous and powerful people, and had permanent villages in various parts of this eastern territory, and, jealous of their rights, looked with distrust upon the innovations of those early pioneers who had fled from European despotism to work out for themselves homes in these rude wilds, where their anthems and praises might arise to the one God, untrammelled by the decrees of 'God-ordained kings.' Small tracts of land were cleared of their dense forest-growth, - fields, cultivated for the growing of those products barely necessary for sustenance; and thus the early pioneer commenced his settlement, the accomplishment of which was not unattended with the endurance of many hardships. Their wild and untutored neighbors often invaded their fields and villages, destroying the products of the former, and laying in ashes the latter. Among the primitive forest-trees, were the walnut, oak, and wild-chestnut. Narrow trails, in use from time immemorial, led along dense jungles bordering upon swamps, and over the uplands, from village to village, and nation to nation."

See our Talk Page for Comments and Discussion