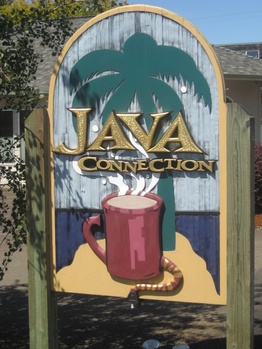 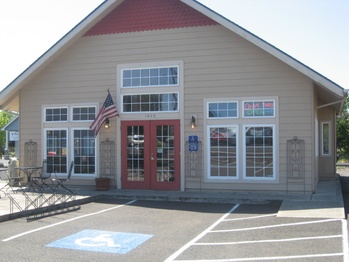 Owned by David Hines, Java Connection was literally built from the ground up, and is still expanding.

Beginning as merely a tarp, four poles, a counter, an espresso machine and a relatively large box of supplies, Java Connection was opened in the parking lot of Fresh Choice Market. Not long after opening, a 'build-it-yourself' storage shed was added, and the tarp poles were permanently affixed into the concrete, eliminating the 'set up, take down' task everyday. Soon to follow, in the winter months, a large tent was added, which remained for nearly two years.

Then came a large step in Java Connection's history. An actual building - a kiosk - was erected, allowing a drive-thru, inside seating, and better security while also allowing greater productivity between multiple employees and larger storage space. The kiosk became something of a legendary fixture in Philomath in only a few short years. The addition of the kiosk brought the capacity for social meetings, 'hanging-out', customer relations, and in general, gave Java Connection it's own 'atmosphere' upon which to develop an atmosphere for customers and visitors.

In October of 2000, Java Connection expanded to a permanent location in a grassy lot between the Philomath Pharmacy and the local liquor store. The new(er) building still allows for a drive-thru (the #1 rated service offered), while significantly expanding available seating, and allowing a kitchen for a deli-style addition to Java Connection's coffee services.

In addition, Java Connection also has a portable coffee cart for use at high school football games, camping retreats and other events where the public desires the services of Java Connection.