The Larry Scott Memorial Trail, almost completed, is the easternmost portion of  the Olympic Discovery Trail (ODT) – a trail that will eventually connect Port Townsend with the shores of the Pacific Ocean at La Push.  When complete,  that will be 126 miles of wide paved or packed gravel pathway designed for bicyclists, hikers, and disabled users, with a shoulder for equestrians where appropriate.  Larry Scott, for whom the local portion of this trail is named, was a Port Townsend resident and cycling enthusiast who played an important role in the founding of the project.

As of April 2012, over six miles of the Larry Scott Trail had been completed -- from the trailhead at the Boat Haven to the Discovery Bay Golf Course. By the end of 2012, the trail is expected to extend a further 1.3 miles, to the Four Corners intersection of Highway 20 and Discovery Road.  At that point, the Larry Scott Memorial part of the trail will be complete.  There are other sections of the ODT which have been completed, over fifty miles of trail in total, but it is definitely, as you may have surmised, a long-term project. 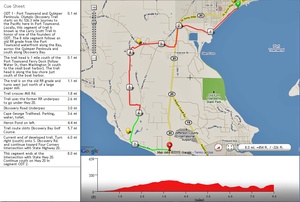