Coker Arboretum is a historic  5-acre ( 3.2 ha) arboretum on the campus of the University of North Carolina at Chapel Hill. The "quiet little haven" is open to the public daily from dawn to dusk, free of charge. Botanical attractions feature  580 species of plants including a 300-foot long arbor made of 10 vines. Diverse recreational uses include strolling along the arboretum's  paths or relaxing for a family picnic. Coker Arboretum is part of the North Carolina Botanical Garden. 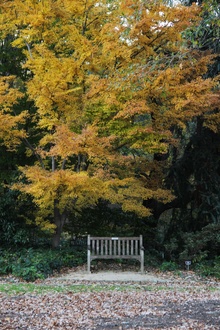 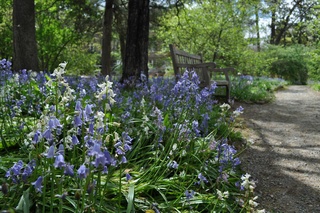 University President Francis P. Venable first suggested the creation of the arboretum to the University's first professor of botany, Williams Chambers Coker, on an evening stroll. Working with a budget of $10 and the assistance of one gardener, Coker established the arboretum in 1903.  Where campus livestock once grazed, an outdoor laboratory allowed students to study trees, shrubs and flowers native to North Carolina.  From its earliest beginnings, the Arboretum underwent continual transformations. In 1923, the botanical haven attained national recognition as the sixth best medical garden in the country. From the 1920s through the 1940s, Coker planted East Asian species next to related species, revealing how they had changed over time. 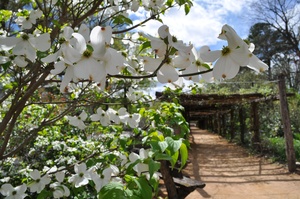 *  The garden's massive Arbor ushers visitors through a 300-foot long timbered walkway.  Draped in 10 different native vine species, the Arbor is an impressive feature not to be missed.

*  Next to the Arbor's midpoint, a stone "gathering circle" and  Class of 1997 plaque honor students that perished that year in a tragic fire.

* Tucked near the center, a babbling stone waterfall and creek offers a great reading, relaxing or photo spot.

* The grounds include species rare to the area, most notably a Metasequoia transplanted from Boston Botanical Garden. 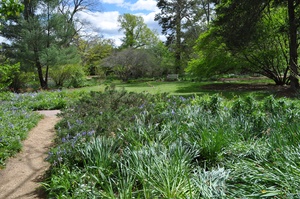 The garden offers quiet spots for students, as well as grassy lawns perfect for family outings. A scavenger hunt brochure with map of the garden is available online from the North Carolina Botanical Garden website. In addition to strolls along the intertwined paths, photography and picnics are favorite activities. But with its abundant seating scattered throughout, the garden invites visitors to simply relax.

Tour:  Free guided tour on the 3rd Saturday of each month from 11am-12pm, March through November.

Tripadvisor Reviews "A sweet, quirky in town garden with lots of local flavor."

Yelp Reviews   "I'm not advocating a culture of fear, but be aware ..."