A Georgian Revival-style home, the John E. and Mary Frances Beaman House was built by John Beaman for his family during a period of professional success. Beaman owned the J.E. Beaman Construction Company, which erected several of downtown Raleigh's first skyscrapers, including the Odd Fellows Building (1924) and the Professional Building (1925), as well as other monumental structures such as the State Agriculture Building (1923)--all Raleigh Historic Landmarks.

Beaman declared bankruptcy during the Great Depression and was forced to sell his home. Today the house exhibits a high degree of architectural integrity and is an excellent example of the Georgian Revival style popular among prominent local businessmen during the 1920s. Private residence. 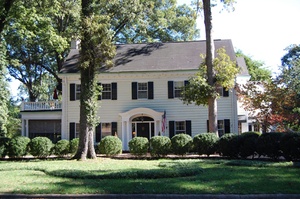