As the world becomes increasingly globalized, the threats of viral infection and contagion are more and more present. With an international airport and Lake Tahoe nearby, the Reno/Sparks area is a prime location to attract whatever virus will create hordes of the living dead. However, with its accessibility to survival tools and tactical locations, it is also in a prime position to be a safe haven for the post-apocalyptic zombie world. The following is a collection of resources.

Recommended literature(note I have seen all of these on www.amazon.com if not the local Barnes and Noble)

How to Survive The End of The World As We Know It by James Wesley, Rawles, Not specifically about zombies, but a sober look at the 'prepper' mentality and tools of the trade. He is the founder of www.survivalblog.com which is the preeminent prepper website in the world, and greatly knows his craft.

Survive! by Les Stroud, This isn't particularly about prepping or zombies, but rather about how to get oneself out of 'worst case scenario' survival situations, such as when lost in the woods, mountains, desert, etc. Much is included about improvised items and fieldcraft(by the host of the popular show 'Survivorman')

The Modern Day Gunslinger: The Ultimate Handgun Training Manual by Don Mann, This is a great complement to a serious exploration of firearms for self-defense, and is very useful in that it gives military and police quality advice and techniques. Extremely useful particularly for the civilian starting from scratch in exploring the use of firearms for defense, even against zombies. Learn now and make mistakes in training, before an army of undead shows up for the big game.

-Firearm training: the Carson shooting range (about 45 minutes outside of the Reno valley) is a hands-off yet well-maintained area where the survivalist-minded can practice their shooting skills uninterrupted.
4000 Flint Drive, Carson City, NV 89701

-To prepare yourself for the strenuous cardio that a zombie-filled world entails, the Reno-Sparks area offers a variety of hiking trails that range from easy to difficult. Find some of the routes at http://www.renotrails.com/

-Participate in the Reno Zombie Pub Crawl every October in downtown Reno (Ok, this might not be a real suggestion for survival practice, but it's really fun.). 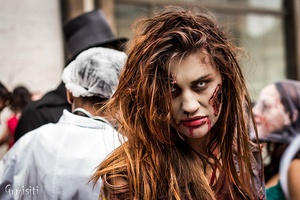 Have a plan in advance:
-Figure out where you will meet your family and friends if you wind up getting separated
-Prepare yourself for what you will do if someone you love becomes infected. They are no longer who they once were, and the only way arrest the spread of infection is by keeping the virus at bay.
-Put together a survival kit. Make sure to include the essentials: food, fuel, blankets, medicine, and field manuals.

How to slow down a zombie when they attack:
-While it won't hold the flesh-eating undead off forever, here's an easy trick to hold them at bay. Spread out a dozen plastic tarps around your home base, then cover them in something slick, like oil or liquid soap. You'll get a solid 15 minute head start to drive away while the zombies are falling over themselves.