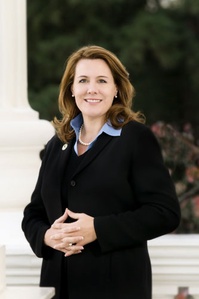 Assemblymember Alyson Huber was elected in November 2008 to represent the 10th District, comprised of Amador County, and portions of Sacramento, El Dorado and San Joaquin Counties. It includes the cities of Lodi, Elk Grove, Rancho Cordova, Stockton, and Jackson.

Alyson’s number one priority is representing the constituents of the 10th District and encourages residents to contact her with issues, concerns and questions.

As an Assemblymember, Alyson is focused on reforming the way the state does business and holding government accountable to the taxpayers so that our children can have a quality education, people can get back to work and the economy can get moving.

Alyson is leading reform efforts to cut wasteful spending on boards and commissions and root out waste, fraud and abuse through audits of state agencies and programs. Alyson believes we need systematic reform that forces the state to reevaluate the way it does business year after year. Routine, scheduled audits and regular reviews of programs, boards and commissions will weed out waste and streamline government.

Alyson is also committed to protecting the interests of the Delta region and fighting for residents to have a voice in decisions on water. Having grown up on the Delta, Alyson is especially protective of its future for generations to come.

Alyson is living proof that the American dream is alive and well. Overcoming family hardships as a child, she worked hard to put herself through school and was the first of her family to graduate from college.

Raised in Lodi, Alyson graduated from Lodi High School before attending San Joaquin Delta College in Stockton. Because of her national success on the debate team she received a scholarship to California State University, Chico. After state budget cuts threatened to dismantle Chico's speech and debate team, Alyson transferred to Cornell University where she received her Bachelor of Science with honors. She came back to California and received her law degree from the University of California's Hastings College of the Law.

Alyson has a life-long passion for community and public service that she brings with her to the Assembly. She has advocated on behalf of the Junior Leagues of California, encouraging reform of our foster care system. Additionally, she has worked with the Conference of Delegates of California Bar Associations to promote justice and equality within the legal system and served as a volunteer advocate for at-risk youth.

Alyson lives in El Dorado Hills with her husband, Tim and two of their four children. They have two children in college.