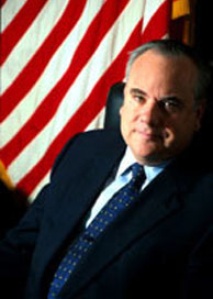 Bill Lockyer was elected on November 7, 2006 as California’s 32nd State Treasurer. The State Treasurer’s Office (STO) plays a prominent role in helping California meet the challenges of building the future for a growing and increasingly diverse population. The STO has many tools to help provide residents what they need to create a stronger California – good-paying jobs, superior schools, improved transportation, quality health care, more affordable housing and a cleaner environment. Lockyer is committed to putting those tools to maximum use.

As Treasurer, Lockyer has continued his commitment to environmental protection. He sponsored “green bond” legislation to make government buildings more energy efficient and reduce their contribution to climate change. He sponsored another measure that makes it cheaper for schools and other governmental entities to install renewable energy generation at their facilities. He revived the California Alternative Energy and Advanced Transportation Financing Authority, which provides low-cost financing for renewable energy and alternative fuels projects. Taken together, these actions help spur California’s green economy, create the good-paying jobs of the future and fight global warming.

As Treasurer, Lockyer has drawn on leadership, management and policymaking skills developed over a public service career that has spanned more than three decades.

From 1999-2006, Lockyer served as California Attorney General and fashioned one of the most impressive records of accomplishment in the office’s history. In his eight years, he helped revolutionize crime fighting in California by creating and maintaining the nation’s most effective and sophisticated DNA forensic crime laboratory. He also cracked down on Medi-Cal fraud, securing hundreds of millions of dollars in court-ordered restitution and penalties. He established the Megan’s Law website to locate and identify registered sex offenders. And he recovered billions of dollars for defrauded energy ratepayers, consumers and taxpayers.

Prior to his election as Attorney General in 1998, Lockyer served 25 years in the California Legislature, culminating his Capitol career with a stint as Senate President pro Tempore. In that leadership position, Lockyer crafted agreements to balance the state budget, and reform government programs to make them run more efficiently and effectively for taxpayers.

A graduate of the University of California, Berkeley, Lockyer earned his law degree from McGeorge School of Law in Sacramento while serving in the State Senate. He also received a teaching credential from California State University, Hayward. He is married to Nadia Maria Lockyer and has a daughter, Lisa, and a son, Diego.