Corti Brothers is a specialty and gourmet supermarket. It has a good selection of wine, cheese, and spirits, especially those brands that are hard to find.  It also has one of the best deli and meat counters in the region. Corti Brothers once had four stores in the 80s, but the Folsom Blvd store was the last store. They first occupied that building in 1970 and have had a month-to-month lease since 1988.

The store was going to lose its lease on its sto 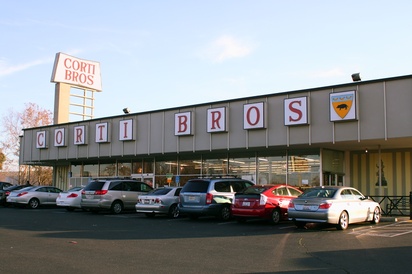 re on September 30, 2008. However, the new tenant Good Eats decided to pull out of the deal. Good Eats posted an ad in the Sacramento Bee explaining their side of the story. They do not want to see Corti Brothers close. The new tenant was supposed to be a gourmet bistro-market called Good Eats which is planned by a partnership including Michael Teel, a former chief executive of Raley's. (Please note that Raley's is not involved in the Good Eats chain. Michael Teel just happens to be the former CEO of Raley's.)