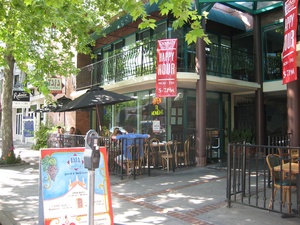 Tapa the World is a trendy late night dining spot, though they are also open for lunch and dinner regularly. Their most popular items are the traditional Spanish tapas... small plates that can be eaten as appetizers. From the Tapa the World website,

"The tradition of tapas began in the south of Spain around the turn of the century. Tavern owners placed a slice of bread over the top of the glass of wine (usually Fino Sherry) to protect it from airborne objects. Some owners started putting tidbits of food, like ham or cheese, on the bread to bring in more business. The edible lid (tapa) became a tradition that was always included in the price of the drink."

Tapas are a light meal... go with a group and order a number of the different offerings and share with the rest of the table. Don't forget to order Sangria or a bottle of wine from their extensive (and very global) wine list. Tapas features outdoor seating which is generally packed on warm spring and summer nights. Live Spanish flamenco guitar and dancing can usually be enjoyed here on weekends.

Some info originally from Davis Wiki.

2007-05-05 11:14:24   Mmmmmmm, YUMMY! I heard their tortilla de patatas is out of this world (no pun intended). They were sold out when we ate there which was around 11 pm on a Saturday. Sangria is awesome and so was their salad special. —SherrieLadegast

2007-05-31 19:27:48   I love this place. Definitely try some different tapas. All that I have tried have been excellent, especially the tortilla espanola, shrimp, and filet mignon. Teh chocolate strawberry addiction is incredible!!! It was a little difficult to get the waitress' attention but it wasn't too bad. —batman-tarzan

2008-02-24 23:49:25   Delicious: Sangria, Chocolate Strawberry Addiction (cheesy name though), Mushrooms, Berenjenas (Eggplant), Mussells, Empanadas. So-so: Paella, potatas bravas. This is a great spot for a bunch of friends to dine on since it's tapas style you want a decent amount of friends so you can try lots of dishes. It gets less expensive with more people too, as the free bread can cover you for a decent amount of money if you get the dipping sauce (lol). With six people at the table expect to spend 10-15 bucks. —AlvinTsao

2008-04-28 16:43:24   Great atmosphere, Poor food. Sunday at 3 pm, the food arrived in widely sparsed time intervals, and the Champiñones were bland, the Tortilla wasn't very tasty, and the olives arrived last after the tapas served. Sangria was keeping us happy. Not as inexpensive as it seems either. And with three different servers, no one really could figure out our order. —Alex