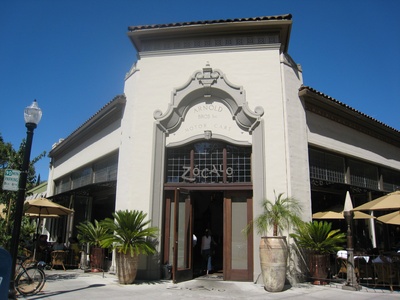 Zocalo is a contemporary Mexican restaurant featuring a full bar. It is, as of fall 2005, one of Sacramento's hotspots and is apparently favored my capitol lobbyists and the like. The dress code is loose, however, so you can get away with shorts, at least for now.

More upscale than your hole-in-the-wall taqueria, Zocalo strives to present a casual upscale dining experience with artwork by Ernesto Cruz, Mexican furnishings, and Mexican cuisine made from California-fresh ingredients. With it's hard surfaces, dining is a somewhat noisy experience, but great for hooking up with friends before heading out; there's also outdoor seating along both Capitol Ave. and 18th Street. Zocalo resides in Sacramento's Arnold Building, which was originally designed for the Hudson Essex car dealership in 1925. An example of Spanish revival architecture, the building was restored in summer 2004 to house this Latin restaurant, opened by the owners of Ernesto's Mexican Food.

Lunch prices range from $6-$10, while dinner salads are in the $10 range, starters a tad lower, and dinner plates start at $11 and head up to $17. Dinner plates appeared to be of generous proportions, but appetizers though tasty, were more of the decorative variety. The tequila menu is impressive, to say the least, but shots will run you $8-$15 — specialty drinks average about $7 and are of the sweet variety.

Some info originally from DavisWiki.

What did you think of Zocalo?

2005-09-22 16:59:03   The appetizer was delicious, but $7 for four prawns seemed a bit excessive! Thank God for the comp chips. A shot of tequila and four prawns ended up costing me $15 + tip. Service was crappy to say the least. About six of us rotated in through the evening, and it always took about 30min for the waitress to take orders. Then she forgot to put in the last dinner order, and we had to remind her to get our drinks. It was busy, but not that busy! Seemed to be a popular birthday restaurant, with sparklers, bday flan, and singing waitstaff. —AlphaDog

2007-05-06 23:04:56   The high ceilings and concrete floor make this a very loud restaurant. I had a really hard time hearing my date. Great food, but probably not somewhere you'd want to go to have a conversation. —AynReyes

2007-08-29 11:58:58   This place annoys me to no end. Its a huge obnoxious meat market. Lots and lots of drunken morons with too much money. Vallejo's and Tres Hermanas are better. —jefftolentino

— Last week it was really, really crowded. They had a few extra bars setup selling margaritas, shots of patron and crappy beer. And there was a taco stand out front. —CharlesMclaughlin

2008-03-29 15:22:58   Mojitos are tasty and the food is good, but the atmosphere sucks, generally. The whole "meat-market" scene turns me off. It's not bad if you just go with some friends and sit out on the patio to eat and drink (weather permitting). —CurlyGirl26

2008-04-02 15:56:49   Oh and I almost forgot just how pretentious this place is! A while back, I went there with some friends after class for a late dinner and some cocktails. It was rather packed, but after waiting in line for a few minutes we got in the door and met with the bouncer for ID checks and what not. One of my friends was wearing a baseball cap and the bouncer made a HUGE deal about it. He told my friend that he couldn't come in—even if he took off his cap! And he didn't say it in a nice way nor did he go into a something about a dress code. He was straight up rude. Completely unnecessary. And really, how picky is this place about who dines there? Judging by the douchebags that they let in, a baseball cap hardly seems like a big deal. But hey, far be it for me to offend the Sacramento aristocracy. —CurlyGirl26

2009-03-28 17:10:46   This place is great. Drinks are a bit expensive but they are quality and the food is awesome. Yes its is crowded and can be a bit snuffy but a weekend lunch or early dinner and this is a perfect place. One of our favorites. —loneshark