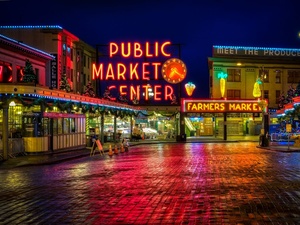 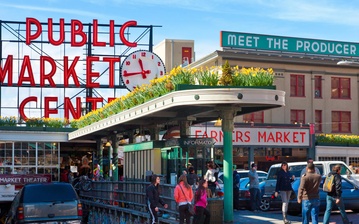 From 1890-1900 the population of Seattle doubled. Farmers came from near and far to be able to sell their fruits, eggs, vegetables, meats, and more to the booming city. In the beginning, the farmers would sell to middleman who in turn would then sell the produce to the public at warehouse sites. Then for a few years in the mid 1900's, produce prices rose to an all-time high reducing the already low to non-existing profits for the farmers, and leaving consumers outraged by the increased pricing. In order to resolve this issue, a market on Pike Place was established in 1907. This allowed farmers to have a place where they could bring their products directly to the consumer, thereby cutting out the added cost of the middleman, which increased farmer profits and lowered the costs to the consumers.

In the beginning 6-12 wagons lined Pike Place where farmers sold their produce. A market expansion occurred in 1922 which is still the basic configuration of the market. Unfortunately, in April of 1942 during World War II, the market lost a majority of the produce vendors as they were primarily Japanese Americans and were put into the internment camps causing them to lose their businesses' and in turn leaving a number of the booths empty in the market. In an effort to attract more businesses and keep the market visibility going, renovations occurred in 1950, 1974, 2012, and 2017. Today, the Pike Place Market is a nine-acre historic district comprised of various buildings, vendor booths, small shops, restaurants, bars, housing, and parking structures.

Pike Place has about 85 local farmers who sell different crops and farm products, a majority being from farms in the Puget Sound or Eastern Washington. There are also 225 local and regional artists who sell homemade crafts and artwork. Commonly featured products include jewelry, pottery, paintings, toys, leather and wood goods. The best part of the craft market is how unique and specialized it is to Seattle culture and traditions. Vendors vary day to day so the craft market is constantly changing and evolving with fresh and new products. Another type of vendor, and easily one of the most iconic aspects of Pike Place Market are the fish markets, where a variety of seafood is presented and sold. A fun feature is how the fishermen are well known for tossing fish back and forth to entertain guests. Due to Pike Place’s location geographically, the seafood is as fresh as possible and often said to be the best sold in all of Washington state. The market also includes places to dine, collectible shops, specialty foods, and street performers. Not very well-known is the fact that Pike Place Market is also home to 400-500 residents, varying from low-high incomes. 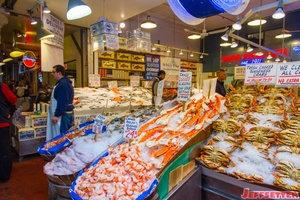 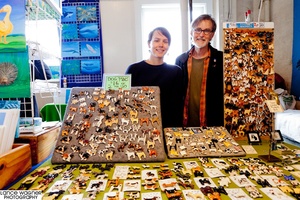 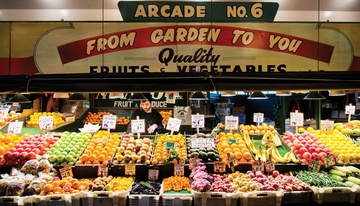 The businesses featured range from small to large in size. La Vaca Burrito Express is a 60-square foot authentic Mexican restaurant and is the smallest commercial business. The Market Theater at 6,000-square feet comes in as the largest commercial business which features 10 shows a week and is home to the most established Improv School in the Puget Sound. The market helps small vendors be successful by providing a place for unique pieces to be sold, that might not necessarily be successful in large commercial stores.

The General Market hours are Monday-Saturday 9AM-6PM and Sundays 9AM-5PM. Openings and closures vary on businesses, as well as holiday closures. Thanksgiving and Christmas are the only two days a year that the entire market is closed. Visitors are always encouraged to check the Pike Place Market official site before their visit. The layout in the markets main structure provides a two-way flow where guests can walk at whatever pace they see fit. During the height of tourist season, one has to be willing to navigate a very congested but always moving flow. Pike Place Street is made of cobblestone and allows an ease of going between the main structure and the other buildings that make up the market.

One of the most admirable features of Pike Place is the cultural diversity the market brings to the city of Seattle. Over a dozen languages and cultures are featured throughout the market. A portion of the produce sold is from farms in Southeast Asia and Mexico. Vendors are also from all over the world and bring with them products from their countries. Herbs and spices from India, sausages from Germany, and even a grocery store primarily filled with Filipino ingredients. The diversity of the market adds to its richness and overall inclusive feeling. There is a little something for everyone, and that can probably attest to why 10 million people visit the market place each year. A benefit to the market is how much opportunity it provides for individuals, and the immense amount of exposure they can receive because of the popularity of the tourist attraction. Tourists are able to enjoy the local flavors, sounds, and traditions of Seattle while also helping provide income for the hundreds of vendors and other Pike Place businesses.

Pike Place Market is a staple within the community, as well as for visitors because it optimizes the welcoming and authentic culture of the Pacific Northwest. The market acts as a gathering point, a lasting photo opportunity, a place to support local businesses, and enrich ones life with art forms and food from all over the world. No matter the season, Pike place is one of the most popular attractions with a spirit and energy unmatched. 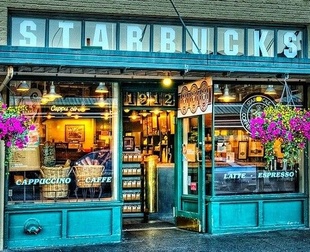 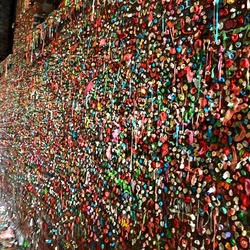 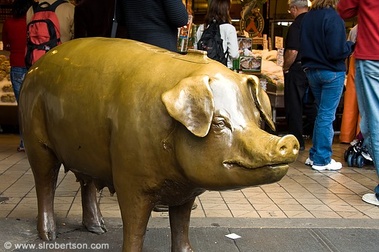 All photos courtesy of Google Images