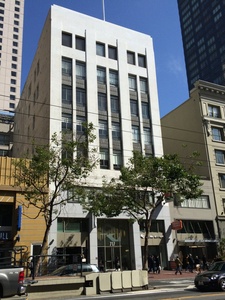 In June 2014 (CC-BY Britta Gustafson)717 Market Street is an ordinary office building. Nobody calls it the Kamm Building anymore, but that was its name when buildings had names.

Sometimes a person who works there may find her mind wandering and wonder who else has sat at a desk in that corner and looked out the window, listening to the constant sirens along Market Street. Or curiously open up a door to a fire exit and find a gorgeous elaborate cast-iron staircase, unlike anything else in the modernized office building, the one thing too heavy to renovate, and she might wonder what the rest of the building used to look like.

Before the fire, a smaller building in the 1890s

An early article about the building is a story of a minor disaster: in November 1895, "a fire broke out in the photograph gallery of Charles Lainer at 717 Market Street, caused by some one carelessly leaving a gas stove lighted. The gallery is in a two-story brick building, owned by Jacob Kamm." Kamm was a successful businessman, mostly in Oregon. From about 1900 to 1902, there are a zillion ads in local newspapers for the Bee Hive Shoe Co. selling shoes from Portland at 717 Market. It's unclear when that two-story building was replaced, but in February 1905, there's a mention of a "Kamm building to be erected on the south line of Market street", and a few significant pictures from 1906 show that it had grown to seven stories... 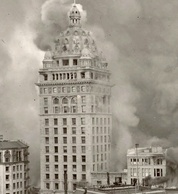 It's the little one on the right, generating lots of smoke.To the right: “Another view of the Kamm Bldg as it burned, just to the right of the towering Call Bldg”.

Afterward, the company that had originally constructed the building took some photos and analysed the damage. The contrast between the front and the back is amazing: "The façade consists of Colusa sand-stone, which remains in first-class condition. The metal cornice has fallen away. The rear half of this building was wrecked by the failure of columns in the basement story, where a large stock of highly inflammable wall paper furnished fuel for a fire that burned continuously for a whole month." 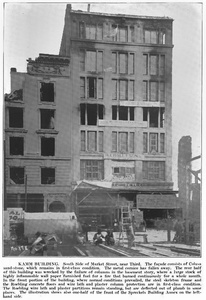 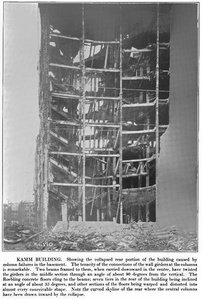 It looked pretty nice after rebuilding, part of a book showing off the work of the construction company (also including lots of neat ads for everything else you might need to reconstruct a building): 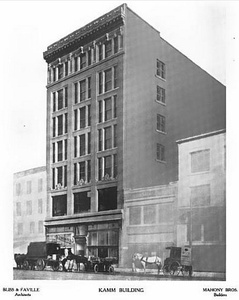 Among the people who rebuilt it:HAYES, John   was a mechanic in a hat factory in Massachusetts, learned the bricklaying trade in Chicago, moved to Australia and New Zealand for a while, constructed sewers and tunnels in Los Angeles, and then built buildings - he “was in San Francisco after disaster of 1906, and while there erected Kamm Bldg., Levi Strauss Bldg., St. Matthew’s School, Fuller Bldg., Koenig Bldg., Home Tel. Bldg., Grant Bldg., Studebaker Bldg.” The Grant Building is 1095 Market Street , another ordinary building; the rest are harder to find.

It was a busy commercial building after that, part of the practical, sturdy framework of a port city back in the business of buying and selling things:

1909 has a school book seller promoting the Gulick Hygiene Series and a California Teacher’s Agency , as well as The Avicultural Society of California, which published a charming Bird News magazine ("Devoted to the Interests of the Bird Fancier").

Interestingly, some of these ads have no full address listed for the Kamm Building, just the name and a suite number. How did people find it? A different system.

The Beat Generation in San Francisco: A Literary Tour says “The Federal Writers’ Project, one of the divisions of the WPA, had offices here during the depression.” — with exciting things happening there. You can read the “guide to the Golden state” they wrote in 1939, part of an American Guide Series—which apparently is quite good:

"Part I of this guide explores the history, culture, and politics of the state, from the gold rush to the water wars, from the sheepherders of Altura to the movie moguls of Hollywood. Part II offers in-depth guides to fourteen cities in the days when 5¢ bought a streetcar ride up Telegraph Hill, $5 bought a meal at the Brown Derby Restaurant, and you could rent a canoe at Long Beach for $1 a day. In Part III, back-road tours through California’s coastal fishing villages and mountain mining towns still provide a splendid alternative to freeways."

"The headquarters of the Twelfth Naval District at San Francisco was the most active center of these operations...the office was engaged in extensive counterintelligence operations against the Japanese community on the west coast. Not only was it responsible for monitoring all the transpacific telephone calls from a Market Street office adjacent to the main San Francisco telephone exchange, but it was also tapping telephones in offices and hotel rooms used by members of the local Japanese business community."

Postwar, back to normal

Founded in 1934, the Wine Advisory Board moved to this location in 1946 when the Pacific Telephone and Telegraph Company bought its building at 85 Second Street. It made lots of ads and recipes and promotion in the 1940s. It was later called the Wine Institute, still there in 1975, and it's still around, but in Sacramento now. Probably related, the California Grape and Tree Fruit League was located here by 1957. They were involved in the 1960s grape boycotts: here's an anti-union, anti grape boycott ad they published in 1968, and a letter Cesar Chavez sent them in 1969.

717 Market has a charming mail chute next to the elevators, with posted instructions with a tiny label saying "Series 4-17-44", which looks like it's from the 1940s: 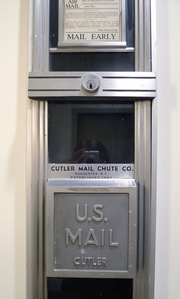 The mail chute is one of few bits of visible evidence that this isn't an entirely new building. 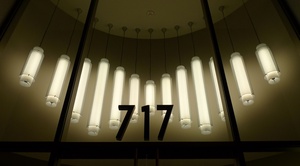 "Ellis Partners acquired 717 Market in 2007 from a developer who intended to convert the project to a residential project. With the decline in the residential sector and based on our forecast of increased demand for creative space, Ellis chose to complete a 12 month renovation to Class A standards and included multiple “creative spec” suites. The project was complete mid-2008, right before the correction in the market.

Colliers recognized a trend that a creative space spec build out was in high demand by a growing force of creative and web 2.0 companies. Colliers’ goal was not only to highlight the availabilities of the property, but also to soften the project’s weaknesses, which at the time were primarily due to its location.

The Colliers leasing team took over 717 Market in 2007 following our purchase and total building renovation of this 100% vacant building. They leased up 75% of the space within a year just before the economy crashed in late 2008. The balance of the building was fully leased by 2011."

This post from 2008 has a nice drawing of it: Makeover at 717 Market Street (“717 Market Street is getting a face lift courtesy of Dr. RMW Architecture and Interiors. The update looks nice, albeit a bit vanilla.”).

Digital Garage rents many of the floors of office space to tech companies, including Mashery ("API Management and API Strategy Services"). The building also holds one of Digital Garage's own projects, DG717. DG717 is a coworking space and event space, so sometimes a person might end up at an event in a building she used to work in, part of a continued shifting of purposes (many overlapping): merchant offices, government offices, ordinary company offices, tech company offices, flexible work space. It's fun to realize that this anti-surveillance hackathon (in 2014) was in a building once chosen as the best location for a major surveillance office.

Also in 2014, DG717 hosted TEDxMarketStreet, a conference themed around Market Street as a central symbol of the city's income disparity between the tech industry and older industries.