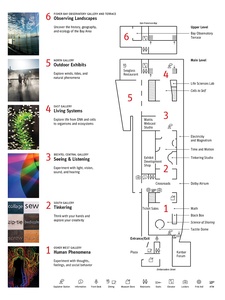 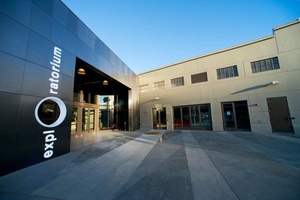 The Exploratorium is an interactive museum of science, art and human perception founded in 1969. The Exploratorium's mission is to create a culture of learning through innovative environments, programs, and tools that help people nurture their curiosity about the world around them. 650 original interactive exhibits, displays, and artworks have been designed, prototyped, and built on site, with 400 currently on view.

In spring of 2013, Exploratorium  relocated to Pier 15-17. The new location offers 330,00 square feet of indoor and outdoor space for exhibits, classrooms and meeting rooms.

Be sure to check out the updated Tactile Dome.

The Exploratorium is home to the Kanbar Forum, a 3,600 sq. ft. multidisciplinary theater space, fitted with a super deluxe acoustic system from Meyer Sound Laboratories, Inc. Because it has 100 speakers, all on different channels, artists and staff are able to change the space's acoustic properties at the push of a button. The auditorium can sound like a jazz club, a concert hall, or an auditorium at the Exploratorium. It is used for film screenings, After Dark events, live music, lectures, training sessions, and a variety of special events, including a series called Resonance, which explores the technology, culture, and perception of sound.

The exploratorium hosts regular monthly and weekly events open to the public for a small ticket fee. Some of these events include "After Dark" Every Thursday night, "Saturday Cinema" every second Saturday of the month, "Pairings" every second Thursday of the month, and "Full Spectrum Science with Ron Hipschman" every fourth Thursday and Sunday of the month, among other events that occur at various points throughout the year. "After Dark" is an 18+ event in the Kanbar Forum that starts at 6PM, after normal hours end and goes until 10PM. Drinks are served, music is played, and exclusive activities, art displays, and films are featured to adults. Tickets are $19.95 for the general public, $14.95 for general members, and free with an "After Dark" membership, costing $45 for unlimited admission. "Saturday Cinema" offers film screenings to all ages in the Kanbar Forum as part of the Cinema Arts Program at the Exploratorium. Tickets are included with museum admission. Children ages 3 and younger are admitted for free. "Pairings" is an 18+ event that features science-involved food topics hosted by two chefs and offers perspectives from other chefs, farmers, scientists, brewers, and vintners. "Full Spectrum Science with Ron Hipschman" is a series of presentations featuring various physics experiments, hosted by teacher and exhibit developer, Ron Hipschman. Tickets are included with museum admission.

There are multiple spaces within the Exploratorium that are open to rent out for events of all sizes and settings of all varieties. Rental options include Fisher Bay Observatory & Terrace, East Gallery, Bechtel Central Gallery, Osher West Gallery, Kanbar Forum, or the full facility. Contact info for rentals is (415) 528-4500 or [email protected]

The exploratorium offers a wide range of programs for research and development in arts and science. Professional Development programs are open to educators of all kinds. It includes the "Teacher Institute" which provides workshops and online communities for science and math teachers, the "Institute for Inquiry" which provides inquiry-based science theories for K-5 teachers, the "Tinkering Studio" which provides hands-on learning activities, and "Field Trip Explainers" which allows for the training of educational professionals by engaging with visitors and facilitating the learning experience by explaining the exhibitions.

Community programs are directed mainly to the youth audiences. The community programs include "XTech" which works with middle schools in the San Francisco area to teach design and engineering through mentors and family science nights, "Community Educational Engagement" which comes to various schools in San Francisco and the UCSF Children's Hospital to provide hands-on science activities, and "Tinkering in After School" which works with the Boys & Girls Clubs to provide resources and activities to children a part of the club.

The arts program is the most prominent, working with artists and key staff. The arts programs includes the "Over the Water Program" which involves opportunities for public commissioned artworks, the "Cinema Arts Program" which partners with galleries and provides film collections for events, development teams, and teaching programs, "Resonance" which is a music series that allows local musicians to showcase their music and creative processes, and the "Artist-in-Residence Program."

(AIR) has grown to include hundreds of artists and performers. The museum works with individuals and artist groups who are drawn to collaboration, interested in interdisciplinary dialogue, and open to developing new working methods. Projects have taken countless forms, such as multimedia performances, theatrical productions, animated filmmaking, immersive installations, walking tours, and online projects. The program allows for artists to embed within the unique culture of the institution, affords access to a dynamic and diverse staff, and provides opportunities for cross-pollination with a broad public. While the museum allows room for variance, residencies typically unfold over two years and include both an exploratory and project development phase."