Known as the "Heart of Chinatown" — Portsmouth Square. This square is called the Heart of Chinatown because Chinatown started along one side of the square and now extends around and beyond it. Portsmouth Square is rich with history as marked by statues, markers, and plaques sprinkled throughout the square. Named for the U.S.S. Portsmouth, commanded by Captain John B. Montgomery, after whom Montgomery Street was named. It was here on the plaza that Captain Montgomery first raised the American flag near the Mexican adobe custom house on July 9, 1846. Portsmouth Square plaza was the center of many early-day activities: 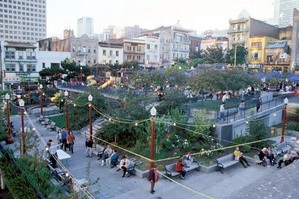