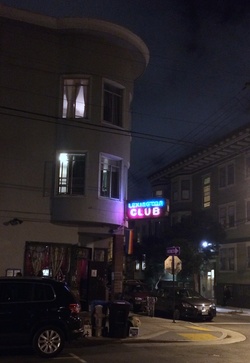 Outside of the Lexington Club, from 19th Street.The Lexington Club was a lesbian dive bar at 3464 19th Street (19th at Lexington). The clientele consisted of mostly women, though well-behaved men were also welcome. Often referred to as "The Lex". Its taglines included "Your friendly neighborhood dyke bar", "Every night is ladies' night", and "Always a party, never a cover". 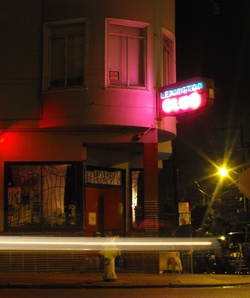 The Lexington Club opened in 1997, founded by Lila Thirkield. Before this location became The Lexington Club, it was a "Mexican bar called The Sunset" according to The Bold Italic. A 2009 article called "Lexington Club offers a 'living room' for lesbian community in Mission District" talks about her efforts to build and maintain the club:

"The owner Lila Thirkield wants to keep the bar open always for lesbians, transgender, and straight people who feel like enjoying a beer and take out after work, a big party, or an episode of the lesbian TV show The L-Word. Even on Thanksgiving and Christmas Eve the bar is open. "I know that I lose money on keeping it open during the holidays, but it’s really important to be here. Many gays are estranged from their families, and they should have someplace to go. Even if only two people show up I’ll keep the bar open for them,” says Lila."

In a 2009 meeting about the "Future of Queer Women’s Neighborhoods in San Francisco", Thirkield noted the community effort involved in founding the bar:

"Some of the things that made it work, is that when they opened they asked for a lot of volunteer help. Partly it was to save money, but they realized it actually was not a money saver because it was difficult to work around everyone’s schedule and to fix mistakes. One the other hand, when the bar opened, the volunteers were very excited and invested and thought that it was their place and would point out to the area they painted or the hinge they cleaned. So asking for volunteers had a huge effect that she did not understand. It created a sense of ownership and pride."

When Valencia Street was "The Women's District" 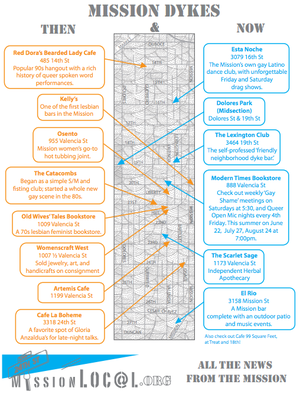 A map of queer spaces in the Mission in the past and in 2010, including the Lexington Club, from Mission Local, by Molly Roy. Changes since then: Esta Noche closed in 2014, and Modern Times Bookstore moved to 24th Street in 2011.Also in that 2009 meeting, Thirkield explained why she chose the Mission:

"When she first moved to San Francisco, she was told that the Mission was the lesbian area and back then it was. There were numerous lesbian and women owned business. Some still exist, but many no longer exist. The area was also being taken over and changed from the Latino neighborhood. The Mission was right next to the Castro where gay men were and where it was more expensive. When she hung out on 16th Street, there was a clear visible dyke presence, so when she opened the bar, there was no question in her mind that it would be in the Mission."

A 2004 history of queer spaces in San Francisco explains this in more detail (page 10): "For women who either could not afford or did not feel welcome in the increasingly middle class, white gay male Castro district, the western edge of the Mission began attracting lesbians in the mid to late 1970s. Valencia Street between 24th and 16th became the principal residential and commercial areas for women." It goes on to lists several local institutions from that time: Old Wives' Tales Bookstore, Artemis Café, The Women's Building, Amelia's bar, Osento bathhouse, Valencia Rose. Old Wives Tales was on Valencia from the 1970s to 1990s, another center of queer women's community.

A 2009 article talks more about the Mission, especially Valencia Street, "as a lesbian stronghold in the 1980s and early 1990s". Before that, North Beach was the place to be, but it got more expensive in the 1970s so people started moving to cheaper places in the Mission. A 1997 essay about Valencia references an article calling it "The Women's District" and also notes the nearby Esta Noche (a queer Latino bar) and Good Vibrations (a women-centered sex shop that grew out of a consciousness-raising group, with feminist motivations), placing these spaces in the context of a shifting neighborhood.

From a 2012 interview with Lenn Keller about the history of queer women of color in SF: "The only building I can think of owned by lesbians or women was The Women’s Building. Most of the bars had disappeared by the late ’80s, and I remember when the Lexington Club was bought in the late 1990s — the older dykes were really proud of them because the only other bar left was Wild Side West. Even if we never stepped foot in there, we felt like it was a really good thing that the Lexington existed."

The book Valencia, by Michelle Tea (2000), details personal accounts of Valencia Street and the Mission as a queer place. A 2013 book called Assuming a Body: Transgender and Rhetorics of Materiality includes a discussion of a "Boys of the Lex" calendar from 2002.

A neighborhood continuing to change in the 2000s 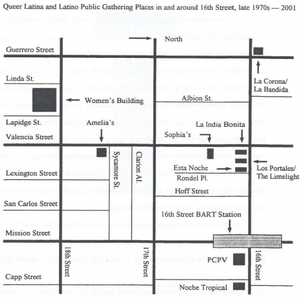 A map of queer Latina and Latino gathering places in the neighborhood, 1970s-2001, via a history of queer spaces in SF, page 19, from a dissertation by Roque Ramirez. (The Lexington Club is not part of this.)By 2002, most other lesbian bars had closed: "But scratch the surface of San Francisco's lesbian community and another perspective is revealed -- bars and cafes catering to lesbians are fading in the nation's gayest city. Last month, the Bearded Lady Café closed. Two years ago, it was the CoCo Club. Long before that, Amelia's, Clementina's, Francine's, Sophia's, and the Artemis Café all cashed out...The Lexington Club has taken over where the Bearded Lady left off, as a dynamic place where women were inspired enough by the creativity of the owners to open a window into their own souls--through readings, music, theater, and art."

From a 2007 article celebrating a decade of the bar: "It seemed so important to have a space where we could be creative, where artists, street kids, and young people could hook up and express themselves," Thirkield says. "It was my first time running a bar, but it was like the whole community was running it with me." Over the past decade the Lex has persevered in the same spirit. "The economics of the city have really changed," Thirkield says. "Our crowd has a really hard time living here now — that's why we never charge a cover and we always support other things going on. But really, we're doing better than ever."

(A 2009 article in Oakland North says that according to the 2000 census, "Oakland contains the highest concentration of lesbian couples of any city in the nation".)

Esta Noche, at 16th and Valencia, closed in February 2014 after 34 years. The 1994 documentary ¡Viva 16! tells stories about the importance of it as queer Latino space.

And in October 2014, Thirkield announced on Facebook that the Lex would be closing sometime in 2015 - saying that it is no longer financially viable "in a neighborhood that has dramatically changed" (including becoming unaffordable for many of its patrons). 48 Hills has a long interview with her about this decision.

The final night of service was April 30th, 2015. Around this time, patrons and staff opened a crowdfunding campaign to install a commemorative plaque at the corner of 19th and Lexington. The Lexington Club Archival Project was also established to document the history of the bar.

A 2007 press release from the GLBT Historical Society called the Lexington Club "San Francisco’s last exclusively lesbian-owned and operated bar." There is one other primarily lesbian bar in the city, Wild Side West in Bernal Heights.

A2013 interview with a bartender explains that it was busy during Pride, after the Dyke March, Folsom weekend, the bar's anniversaries, New Year's Eve, and Halloween. She says "I have no problem with straight people visiting. But they need to be mindful of that it is a queer bar. We need a space to feel comfortable. I want to say, 'You walked under that rainbow flag to get in here.'"

Fodor's says "expect piercings and tattoos, not lipstick" and "the women's room has awesome graffiti".

The owner of the Lexington Club is a partner owner of Virgil's Sea Room, another bar in the Mission. She also helps organize the Dyke March.