The legend began on April 23th, 2017 when a Daybreak resident posted an image of a note that he claimed was stuck to his front door by a disgruntled neighbor. The note stated: 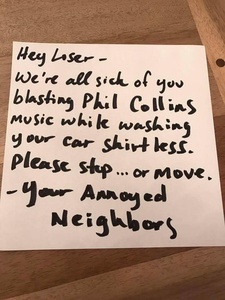 The note was received by neighbors on Facebook with great amusement and sympathy.

On April 24th, 2017, the ALT 101.9 radio station posted the image on their Facebook page with a request to speak to the addressee of the note on the ALT Morning Show. The ALT Morning Show was able to get in contact with the individual and he then appeared on the morning show to discuss his experience. In a Facebook comment, ALT 101.9 stated "we chatted with him and he is magic. and most of his neighbors are behind him. he is our new spirit animal. and we are going to have a shirtless car wash later in the summer for everyone and blast phil collins."

On July 8th, 2017 a shirtless car wash was held in a parking lot in SoDa Row, with ALT 101.9 providing Phil Collins tunes. Proceeds from the car wash were donated.

Since that time, Phil Collins and shirtless men who wash cars have become the subject of many jokes among residents of the Daybreak community.