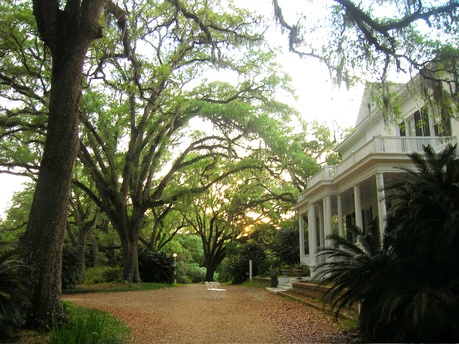 Goodwood Plantation was part of the Lafayette Land Grant (awarded by the United States to General Marquis de Lafayette in 1824 by the United States Congress), was originally purchased in the 1830's by Hardy Croom of North Carolina, who with his family lost their lives at sea before building on the property.  Initially inherited by his brother Bryan Croom who completed the house in the 1840's, Hardy Croom's mother-in-law sued in the case of Smith and Armistead v. Croom, which made its way to the Florida Supreme Court, then the U.S. Supreme Court - which ruled in favor of the Smith family.  The property was then sold to  Arvah Hopkins in 1858. Subsequent owners include Dr. William L. Arrowsmith (1885), Mrs. Alexander  (Fanny) Tiers (1911), and finally Senator William C. Hodges (1925).  Mrs. Tiers is primarily responsible for the extensive renovations that created the Goodwood of today.  Senator Hodges died in 1940, leaving the estate to his wife Margaret who married Thomas Hood in 1948.  Hood was an army officer who rented a cottage on the estate during World War II.  Hood established the Margaret E. Wilson Foundation in her memory in order to create a park and museum at Goodwood after his death.  Hood resided at the house until his death in 1990.

Goodwood was added to the U.S. National Register of Historical Places in 1972.

In its day, Goodwood was a center for social activity among the politically and socially prominent in Tallahassee.  An elderly Hood, while living in the home by himself, recounted that there was a step at the top of the main stairway that would randomly creak on rare occasion without weight on it, despite the fact that no one could get it to creak by simply stepping on it.  He believed that each time it creaked he later learned that a person associated with Goodwood at some time in their lives had passed away.

From its earliest days, owners left furniture and personal effects behind at Goodwood.  Therefore, the museum has an extensive collection of fine furniture, porcelain, textiles and glassware. It has the earliest fresco ceilings in Florida, which Margaret Wilson's widower Tom Hood - an artist by trade - made efforts to restore in the last decade of his life by climbing up and lying on huge scaffolding set up in the front parlor area.  Originally a working cotton plantation of about 1,675 acres, the original land was sold off and is currently largely occupied by Tallahassee Memorial Hospital and its adjacent annexed properties, along with other medical buildings.

One of the former guest houses on the property adjacent to the swimming hole, called "Rough House", has been renovated to become Fanny's Garden Cafe, serving lunch Tuesday through Friday every week.

Goodwood is a popular location for local events, especially weddings.  The new Carriage House Conference Center seats 200 people and is available for event rental, as are the grounds, the Jubilee House and the Laundry Cottage.

Goodwood relies on the support of the public as Friends of Goodwood to continue to keep its doors open.