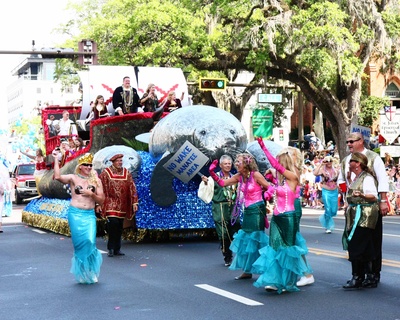 The centerpiece of the event is a 1.5 mile "grand parade" that travels North Monroe Street downtown beginning at 7th Avenue and ending past the Florida state Capitol Building at Gaines Street.  A day long arts and craft festival and a number of stages with a wide variety of simultaneous performances through the day are also a major draws, as is the Downtown Getdown that typically occurs the evening before Springtime Tallahassee.

The organization that runs Springtime Tallahassee is divided into five "Krewes," each of which represent an historical time period in Florida history: Spanish (1528-1821), American Territorial (1821-1845), Antebellum Statehood (1845-1861), War and Reconstruction (1861-1900), and Twentieth Century (1900-1999).  Each year members of the organization are chosen to portray "parade Grand Marshal" Andrew Jackson, Florida's first provisional governor and later the seventh president of the United States, and his wife Rachel.  Each Krewe participates in the Springtime Tallahassee parade with generally the most elaborate floats at the event.  Members of the organization participate in other Florida events through the year and at out of state events representing Springtime Tallahassee.

Other activities surrounding the spring festival sponsored by Springtime Tallahassee include Belles & Gents, and Junior Belles & Gents (youth service organizations also featured in the parade festivities); Social Club 35, a membership club for adults under 35; and a 501(c)3 foundation tasked with promoting the history and culture of Tallahassee and supporting local economic development.

To become a Springtime Tallahassee member you must apply.  If accepted there is a $450 annual membership fee ($350 for members 35 and under).

Save the dates of April 1st and 2nd, 2016 as we celebrate 48 years of Springtime Tallahassee.

Be sure to "like us" on facebook for regular updates and photos leading up to festival events.