Public Domain text from the Poster as part of The Missing Plaque Project...

A MEMORIAL TO THE REBELS 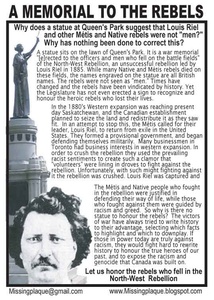 Poster from The ['Missing Plaque Project"]. Why does a statue at Queen's Park suggest that Louis Riel and other Métis and Native rebels were not “men?” Why has nothing been done to correct this?

A statue sits on the lawn of Queen's Park. It is a war memorial "[e]rected to the officers and men who fell on the battle fields” of the North-West Rebellion, an unsuccessful rebellion led by Louis Riel in 1885. While many Native and Métis rebels died on these fields, the names engraved on the statue are all British names. The rebels were not seen as “men.” Times have changed and the rebels have been vindicated by history. Yet the Legislature has not even erected a sign to recognize and honour the heroic rebels who lost their lives.

In the 1880's Western expansion was reaching present day Saskatchewan, and the Canadian establishment planned to seize the land and redistribute it as they saw fit. In an attempt to stop this, the Métis called for their leader, Louis Riel, to return from exile in the United States. They formed a provisional government, and began defending themselves militarily. Many businessmen in Toronto had business interests in western expansion. In order to crush the rebellion they used the prevailing racist sentiments to create such a clamor that “volunteers” were lining in droves to fight against the rebellion. Unfortunately, with such might fighting against it the rebellion was crushed. Louis Riel was captured and later hanged.

The Métis and Native people who fought in the rebellion were justified in defending their way of life, while those who fought against them were guided by racism and greed. So why is there no statue to honour the rebels? The victors of war have always tried to write history to their advantage, selecting which facts to highlight and which to downplay. If those in power today are truly against racism, they would fight hard to rewrite history to honour the true heroes of our past, and to expose the racism and genocide that Canada was built on.