Based upon public domain text from The Yonge Street Riot poster from The Missing Plaque Project... 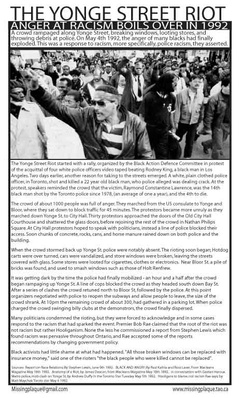 The Yonge Street Riot poster from The Missing Plaque Project. A crowd rampaged along Yonge Street, breaking windows, looting stores, and throwing debris at police. On May 4th 1992, the anger of many blacks had finally exploded. This was a response to racism, more specifically, police racism, they asserted.

The Yonge Street Riot started with a rally, organized by the Black Action Defence Committee in protest of the acquittal of four white police officers video taped beating Rodney King, a black man in Los Angeles. Two days earlier, another reason for taking to the streets emerged. A white, plain clothed police officer, in Toronto, shot and killed a 22 year old black man, who police alleged was dealing crack. At the protest, speakers reminded the crowd that the victim, Raymond Constantine Lawrence, was the 14th black man shot by the Toronto police Service since 1978, (an average of one a year), and the 4th to die.

The crowd of about 1,000 people was full of anger. They marched from the US consulate to Yonge and Bloor, where they sat down to block traffic for 45 minutes. The protestors became more unruly as they marched down Yonge Street to City Hall. Thirty protestors approached the doors of the Old City Hall Courthouse and shattered the glass doors, before rejoining the rest of the crowd in ['Nathan Phillips Square"]. At City Hall protestors hoped to speak with politicians, instead a line of police blocked their access. Soon chunks of concrete, rocks, cans, and horse manure rained down on both police and the building.

When the crowd stormed back up Yonge Street police were notably absent. The rioting soon began; Hotdog carts were over turned, cars were vandalized, and store windows were broken, leaving the streets covered with glass. Some stores were looted for cigarettes, clothes or electronics. Near Bloor Street a pile of bricks was found, and used to smash windows such as those of Holt Renfrew.

It was getting dark by the time the police had finally mobilized - an hour and a half after the crowd began rampaging up Yonge Street. A line of cops blocked the crowd as they headed south down Bay Street. After a series of clashes the crowd retuned north to Bloor Street, followed by the police. At this point organizers negotiated with police to reopen the subways and allow people to leave, the size of the crowd shrank. At 10 pm the remaining crowd of about 300, had gathered in a parking lot. When police charged the crowd swinging billy clubs at the demonstrators, the crowd finally dispersed.

Many politicians condemned the rioting, but they were forced to acknowledge and in some cases respond to the racism that had sparked the event. Premier Bob Rae claimed that the root of the riot was not racism but rather Hooliganism. None the less he commissioned a report from Stephen Lewis which found racism was pervasive throughout Ontario, and Rae accepted some of the reports recommendations by changing government policy.

“All those broken windows can be replaced with insurance money,” said one of the rioters “the black people who were killed cannot be replaced”.