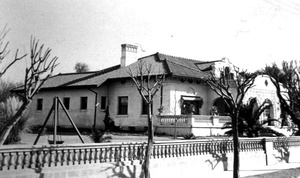 The J. Knox Corbett House is a two story home that was completed in 1907 to have a Mission Revival Style, or otherwise known as a Spanish Mediterranean style. This style is one that was very popular during the time the Corbett family built their home. The outside of the J Knox Corbett House includes many different architectural designs that suggest the house is of Mission Revival Style. These characteristics include the stucco-covered brick, clay tiled roof, as well as the arched porch. The house This home has been restored to have furniture, ceramics, as well as other objects that are a reflection of the American Arts and Crafts era of the 1880s to the 1930s. This house is a great addition to the city of Tucson because it serves as a reminder of the cities rich history, as well as the architectural design and period that was the Mission Revival Style.

The Corbett family was able to come into the property due to Elizabeth Corbett’s godmother and aunt, Petra Stevens. Petra Stevens suffered the loss of her husband, and her daughter eventually got married and moved out. This led Petra Stevens to be living in the house all by herself, leaving her lonely. She decided to gift Elizabeth Corbett the north part of her property, as well as lots three and four. Elizabeth, and her husband Knox Corbett decided to build on the property that was given to them by Petra Stevens. They went on to build their home over this property and this is where they resided until their death. After building this property, Knox Corbett eventually went on to purchase other pieces of property on the same block that had belonged to Petra Stevens. The J Knox Corbett House stayed within the family for a long period of time. Knox Corbett and his wife Lizzie lived in the house until their deaths, Knox dying in 1934, and his wife Lizzie dying in 1936. After their death, the house still remained in the family, as their daughter Gulie continued to reside there with her husband and child. After Gulie’s death in 1945, her other family members sold the interest of their share to her brother Hi. After the death of his wife, Hi went on to remarry and continued to live in his family home. However, his new wife was not impressed with the home and did not enjoy living there. Because his wife no longer wished to live in the house, Hi went on to sell his family home in 1963 leaving the home no longer in family possession. Hi sold the home to W. Mercer Bouldin, who wished to buy the home in order to use it for his legal practice. 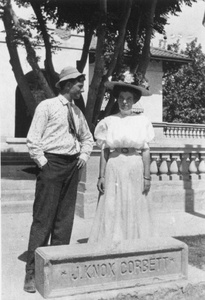 J Knox Corbett was an interesting individual, who adds a lot to the interest of the J Knox Corbett House. He was involved in many successful business ventures, including buying out a stage line, the lumber industry, being appointed postmaster of Tucson, as well as serving as the Mayor of Tucson. J Knox Corbett served as postmaster of Tucson for twenty-three years, and served under four different presidents. He was post master of Tucson for such a long period of time that people assumed that he owned the business himself.  One of the most interesting ventures of J Knox Corbett was his time as the Mayor of Tucson. Mr. Corbett was said to be an active member of the republican party, and held the position of mayor for three years. In addition to being mayor he was also the Secretary of the Territorial Republican Committee, the Chairman of the Territorial Republican Committee, the President of Citizen Publishing Co., publisher of the Tucson Daily Citizen, served one office term on the Tucson School Board, Vice President of Tucson Milling Company, Secretary of H. D. Corbett Stationary Store, as well as founding and directing the Tucson Building and Loan Association. As you can see, J Knox Corbett was a man of many interests, and was a man who stayed constantly involved in the city of Tucson. His involvement in so many different areas of the city and its history is one of the reasons why the J Knox Corbett house is so fascinating.

During that time, the house served as a central location for many social gatherings. Mrs. Corbett was said to be an extremely social person, and often hosted parties, clubs, as well as civil meetings at the J Knox Corbett House. It is also speculated that during the time of prohibition, the family used the upstairs attic to make gin.  It was fully furnished with mahogany furniture that were all imported from Europe. The house also has a full basement that at point housed one of Tucson’s first air conditioning systems, which was a water cooling tower. There is one piece of original furniture that still resides in the J Knox Corbett house today, and that is an intricately carved buffet. 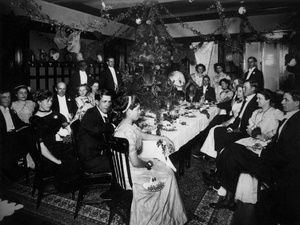 The J Knox Corbett house remained a family property until the 1960’s. The property was later obtained by the Tucson Museum of Art in partnership with the City of Tucson. This took place in the 1970’s, and the house was later restored to include pieces that were a reflection of the American Arts and Crafts Era in 1995. This era in art had an emphasis on traditional craftsmanship, and there was the use of many simple forms. The Arts and Crafts era also stood for reacting against any poor quality or mass produced pieces of decorative art. The restoration includes furniture, ceramics, as well as other various objects that are meant to give the idea that normal objects have the ability to be transformed into works of art. This is able to be done by the different materials, colors, and motifs used. 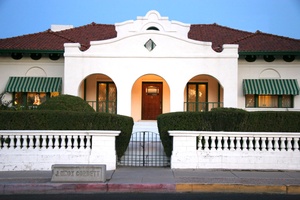