Arizona Softball has been a staple of the Tucson community since the creation of the team. In its history, Arizona has won eight Women’s College World Series titles and hosted 19 NCAA Regionals. They have also won 10 PAC-12 titles in Hillenbrand Stadium since joining the PAC-12 conference. Arizona softball attendance has lead the nation in attendance four of the past 10 seasons. Every year thousands of fans come out to attend games. Hillenbrand Stadium have helped to bring Division I collegiate softball to the forefront of collegiate sports. This stadium is for the fans and alumni just as much as it is for the players. Arizona fans claim to be the best in the country. Fans love to come watch the Wildcats play at home. At home the wildcats have a winning record of 641-78. They also hold the national record for most at home wins with a 70 game winning streak that was unfortunately broken in 2002 by the University of California Los Angeles.

Mike Canedra has been the Head Coach of Arizona Softball for the past 35 seasons. As well as coaching Arizona Softball, Candrea has coached USA softball on the Olympic level. Candrea has been inducted into the National Softball Hall of Fame,NFCA Hall of Fame, Pima County Hall of Fame, and Central Arizona Hall Athletic of Fame. He has also been honored with Regional Coach of the Year six times as well as National Coach of the Year four times. He has helped Arizona Softball appear in the Women’s College World Series 23 times, most recently in the 2019 season. Canada's constant support of the softball team and love of the sport have helped put fans in Hillenbrand Stadium. In 2017, Hillenbrand's total attendance surpassed an attendance of 1,000,000 fans. Mike Canedra has helped make a name for Arizona Softball and a staple of the community. 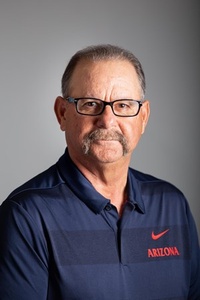 Since 2006, Hillenbrand stadium has been receiving renovations. In 2006 permanent bleachers were added to increase the capacity of the stadium to 2,956. There was also the addition of a state-of-the-art video board and scoreboard. This scoreboard has allowed fans to watch past and present season highlights in between innings. It also allows for video player introductions when players come up to bat.

In 2008 the stadium saw the addition of an outfield warning track as well as weather-resistant infield surfaces. New infield surfaces meant that the field could be played on for an increased three quarters of the year. This is crucial for team practices given the extreme temperatures found in Arizona for a majority of the year and softball season.

In 2010, a padded wall was added in the outfield. This wall includes the addition of accomplishments of past players.

In 2014, the first phase of the official remodel was completed. This phase included the installation of home bull-pens, state-of-the-art locker rooms, and batting cages. The former team room was remodeled to be an athletic training facility. These new facilities rival any other athletic facilities nationwide for any sport.

In 2019, Hillenbrand Stadium saw a $8 million renovation. This renovation saw drastic alterations to the appearance. It included a new shade structure for a majority of infleid seats, the addition of two premium seating areas: The Club Level and The Field Level, pole-less netting to protect fans while giving them an unobstructed view, and an Alumni Plaza. The Club Level seating includes 40 air conditioned seats with private restrooms and food access. The Field Level seating provides newly backed chairs behind home plate. The Alumni plaza consists of standing room only on the third base line. This area recognizes the history of Arizona Softball and gives Alumni an area to watch the games together while reminiscing on past seasons. The stadium also received a new concourse with updated restrooms and concession areas. As well as a new ticketing office, store and entrances. The dugouts have been expanded to include restrooms and water stations for players. 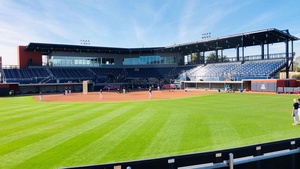 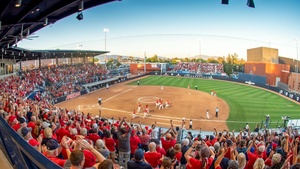 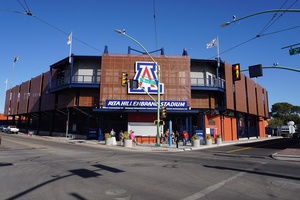 Rita Hillenbrand Memorial Stadium had its grand reopening following the 2019 renovations on February 14th 2019. Doby Hillenbrand (wife of William Hillenbrand), Dave Heeke (Arizona Athletics Director) and head coach Mike Candrea performed a ribbon cutting ceremony prior to the first pitch. Arizona was to face New Mexico in the home season opener but the game was rained out. Due to the original games cancellation, a second ribbon cutting ceremony was performed the next day, February 15th 2019, prior to the first game being played at the remodeled stadium. The first game was played against the University of South Florida in the Hillenbrand Invitation with an unfortunate 1-4 loss. 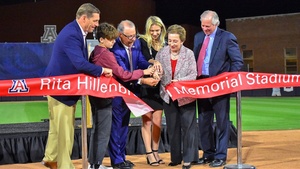 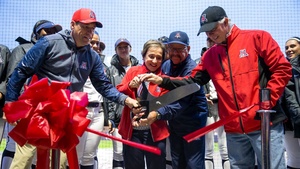