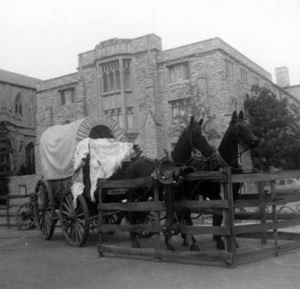 First United Methodist Church formed in Tulsa as the Methodist Episcopal Church in the 1880s. It was the second formally dedicated Christian church in Tulsa and the first formally dedicated Methodist church in Indian Territory. Services were held under a brush arbor on the northwest corner of Main and 2nd (now Brady) until a small white building was constructed in that location. The land was donated by Chief Legus Perryman. The second church home was located on the northeast corner of 5th and Boulder and was dedicated in 1906. Well-known Tulsans were present at the 5th and Boulder ground-breaking ceremony including N. W. Mayginnes, M.D., Prier Price, Mrs. A. A. Kemp, Mrs. J. H. McBirney, Robert McBirney, Mrs. N. W. Mayginnes,  J. H. McBirney and George Henry. Construction on a new cathedral at 11th and Boulder began in 1921 and was completed in 1928. The church was constructed with stone found near Garnett Road.