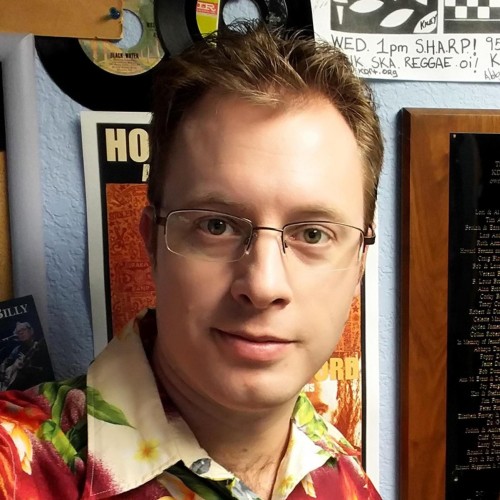 Karl at the Seed Biotech Center

This weirdo used to write the Science Column for The California Aggie, hosts a radio show on KDRT, and used to keep Honeybees at the Experimental College Community Garden, where he tended a controversial garden. He has aspirations of a combo-career in plant genetics and in science journalism. Pursuing this goal, Karl applied and has been admitted to a Ph.D. program in Plant Breeding and Plant Genetics at the University of Wisconsin, Madison, starting in June 2007. He and Ariela departed Davis for Madison on May 23rd. Karl currently resides in Madison, Wisconsin, and has founded the Madison Wiki.

He is also one of the people on the wiki that likes to write his own wiki page in the third person.

Karl is an elemental sorcerer who specializes in the dark arts of Apiarimancy. In his traditional white robes, he summons and dispatches the hive with deft control over the natural world. Do not cross him, or you may feel the sting of his anger.

Karl has often been referred to as a "Renaissance Man," as he has picked up numerous skills in the quarter-century that he has been living among humans. These include woodworking, sewing, a little website coding, cooking like crazy, boating skills, audio/video recording and mixing, and everyone's favorite, constructing doomsday devices. You can see some of his creations here on this page, or periodically appearing on his website. Ixnay on ellingtay the edsFay about the oomsdayday evicesday. This was the name that Karl came up with for his Aggie column back in 2002, which refers to a mind that has been "infected" with ideas, as opposed to a "sterile" mind. Mental sterility with regard to a subject is synonymous with ignorance, and thus it became Karl's mission to "inoculate" people with facts and ideas about scientific topics. Some people have taken "inoculated" to mean "smart," but it just means "full of ideas." The title lent itself to so many useful metaphors that Karl decided to keep it for his future writings. Interestingly enough, in the middle of his first year writing for the Aggie, the Editor in Chief decided to remove the fun titles that everyone had under their column mugshots, but since Karl's column was deemed "educational" he got to keep his.

Whose brain is that? In 2005, Karl elected not to continue writing for the Aggie to pursue other writing opportunities. Taking the theme to the extreme, Karl now maintains a weblog of the same name as the column, that features fMRI scans of his own brain, and his thoughts rolling out underneath.

In 2004, a new community radio station opened up in town, KDRT, and Karl was one of the first to hop on board and host a show. Now over 2 years running, The Inoculated Mind Radio & Mindcast combines weekly science news, interviews with scientists and intellectuals, wrapped up in rotating theme music selected from science fiction films, shows, and video games. (Ok, just one video game - Halo.) Karl tacked Mindcast onto the title when he launched the podcast version of the show in August, 2005. Before the mindcast, every show began with "Citizen's of Davis (and UC Davis)." Now, every episode begins with "Citizens of Earth..." The show aired live every Thursday evening from 1800-1930 hours, and Sunday evenings it replayed from 2100-2230. (6-7:30 pm live, 9-10:30 pm sunday replay) Karl's last live Davis show aired on May 10, 2007. Although the show has stopped airing, as soon as Karl gets it going again in Madison, you may be able to hear it again in Davis!

http://www.inoculatedmind.com/audio/mindcast.xml Subscribe the the podcast of Karl's radio show by entering this page into your podcast aggregators (iTunes, iPodder, etc)

Karl's Bees, Elena on the left, the other two are not yet named.

Ready for the centrifuge.

Approx. 33 pounds of honey extracted (one quart jar not shown).

A close-up of the small jars that Karl uses as gifts for guests on his show.

This wiki denizen brought to you by the Prince of Darkness.

Karl hasn't been in the Aggie this often since he wrote for the Aggie. Still, here's news #1 and #2.

Already has over 200 pages. Okay, they're all stubs. But it's 200 stubs! 02/23/2007 - With the help of PhilipNeustrom, Karl has started a science-related wiki project. Called the DNA Wiki, someday it will be the quintessential guide to genetics, biology, and biotechnology for everyone who wants to know more about these fields.

If only the camera angle was wide enough... ...then it would have included me in this shot.

11/29/2006 - Karl participated in a panel, and got to ask questions of Michael Pollan, author of The Omnivore's Dilemma. (Aggie story) His newly-stitched corn shirt also debuted at this event. Michael Pollan noticed the visual metaphor from his book and pointed it out to audience members. Michael Pollan may soon come on Karl's radio show for an interview.

08/06/2006 - Karl made the local paper for an impromptu experiment he conducted on bees during the West Nile mosquito spraying, 2006.

07/26/2006 - Announcing the completion of the coolest homemade shirt in town. That is, until Karl finished the corn shirt. (See above and below)

01/15/2006 - Announcing the launch of Karl's weblog, for fans and critics alike. http://www.inoculatedmind.com Scientist crushed by transgenic tomato, whereabouts of leg unknown The police came and went before we could really see what happened. Leslie took a picture of the outlines. Apparently an unsuspecting scientist harvesting seeds was crushed by a variety of Solanum lycopersicum previously unknown to science. The plant fled the scene and local authorities are searching beehives for pollen to track down the suspect. The tomato is believed to be sweet, meaty, and “branched and dangerous." Doing my part to throw a monkey wrench into prescribed fashion trends. 2007-09-07 18:28:46   Yup, here in Nittany Valley, it was August 18th and 19th. I used to drive Sarah in to her office on campus after going out for coffee every morning. Suddenly I was facing a wall of undergraduates, scooters and motorcycles (which are very popular around these parts, given the hills and mountains). I'll raise a glass to you this winter, fellow snow-bound ex-Davisite. —JabberWokky

2007-09-09 15:38:02   He may have meant to hurt you in the political sense. Hard to say considering he is neither physically, mentally, or politically intimidating! —KarlMogel

2007-09-09 16:50:59   I think the comment SO left on his own page to William: "I have no interest in you. As far as I am concerned you are a troll and an annoyance. You bring nothing of value to any of my activity pages or ASUCD pages. You attack me while you hide behind your user page and non-existent reputation. —SteveOstrowski" sums up how he views the DavisWiki most clearly. Also, I left the comment on the talk but the edit by Jose was on the actual page, Steve deleted it mid revert and decided it'd fit best on the talk page apparently. —EdWins

2008-01-27 22:39:57   Holy moly, hey Karl. I'm traveling around (aka being pampered) interviewing with graduate programs - planning to stick to microbio/pathogenesis and all that fun stuff :D In the meantime I've been cloning/playing around with genomic DNA for a small biotech startup in the Bay Area. Human stuff, I never really got interested in plants :P Thought I'd just drop a line and say hi, hope everything is going well up in Madison! If I wasn't trying to stay within California, I would have applied up there, they have a nice program. I still check your site at least once a month! —EdWins