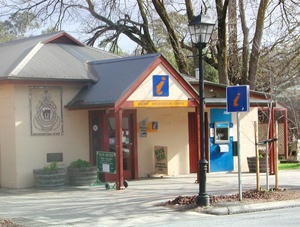 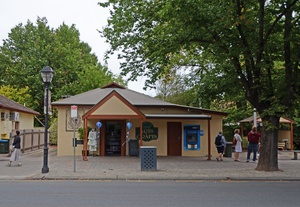 The site was originally obtained in 1953 by the Returned Soldier's League (RSL) and the Hall was opened in October 1955.  The Hall was shared with the Country Women's Association (CWA).

As members numbers declined due to age, the Hall fell into financial difficulties despite the efforts of both groups.

The Hahndorf Lions Club was approached for assistance.  The RSL and CWA subsequently relinquished their ownership with the proviso that the Hall was to remain the property of the Hahndorf Community.

In 1973/4, the Hahndorf Lions Club facilitated the establishment of the Hahndorf Community Hall Committee Inc. which holds the title on behalf of Hahndorf residents.

The RSL mural on the front wall is of interest as the mirror fragments come from periscope mirrors from WW1 submarines. 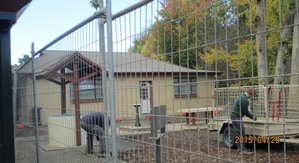 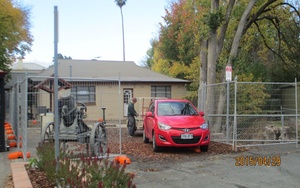 Hahndorf Community Hall - at 41 Main Street.  This hall was originally built for the Country Women's Association and then was shared with Hahndorf RSL.  Falling membership for both organisations then required some financial involvement from Hahndorf Lions in 1975.  The building and land beside it belongs to the Community, and is managed by the Hahndorf Community Hall Committee Inc.  This is a body of Hahndorf Lions and residents, which acts under a recently reviewed Constitution and which is totally responsible for the maintenance of the premises, including the Minenwerfer.  Currently income is derived from the two long term tenants, Camellia Cottage and the Cash Card ATM.  When funds permit, donations are made to "not for profit" groups in Hahndorf.

The Committee is in the process of landscaping the surrounding grounds to improve its ambience for all of the Hahndorf residents which is why the high fence has been erected.  Some items, with assistance of strong Lions Club members, have been relocated to the Oval.  We are assured that the iconic but aging wishing well will be replaced within the park as it is a magical and spiritual source for many visitors and local folk who toss a coin.

The redevelopment of the garden and seating area attached to 41 Main Street continues to progress.  Items like the picnic setting, shelter, drinking fountain and flag pole have gone to the Hahndorf Oval and Hahndorf Academy.  Our thanks to Mt Barker District Council for their help with rubbish removal.

Greenslades Landscaping has completed the paving, fencing and planting out of the garden area and the new Isco picnic settings and seating have been installed and the area is being well utilised by visitors to Hahndorf. 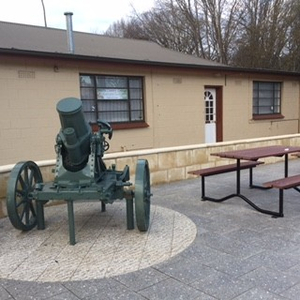 Schwerer Minenwerfer MortarThe Schwerer Minenwerfer Mortar has been sandblasted and repainted in “Feldgrau”.  After research, it was ascertained that Feldgrau was most likely the original colour used by the factory when the Mortar was made around 1910.  Our thanks to Hills Towing and Aldgate Crash Repairs for all their help with the repainting of the Mortar.  While researching the colour of the Mortar it was discovered that some facts on the original information plate at the site were incorrect.  Further research into the provenance of the Mortar continues with the assistance of the Australian War Memorial.  It is hoped that more accurate information can be provided on the plate when it is replaced.

One of the last parts of the garden redevelopment is the design and construction of a new wishing well.  The Committee is pleased to be working with Lothar Brasse, a heritage architect, who has an extensive knowledge of Hahndorf.  Lothar has provided a concept drawing to the Committee and we are working with him to fine tune the design.  When the design is complete and costed we will then undertake the construction of the wishing well.

The main objective of the Hahndorf Community Hall Committee is the maintenance of the building and surrounding garden area.  The garden renovation has been funded from money raised through the tenancy of the Community Hall.

Information from The Hahndorf Allotments Database. 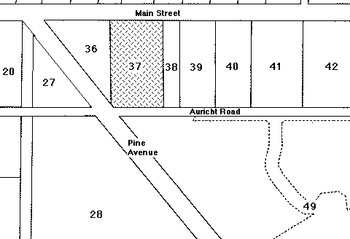 ** J Owen leased the property to James Stevenson, gentleman, Hahndorf, for ten years from 1 March 1894. Mr Stevenson had been a planter in India.
++ The Brakspears were relatives of Mrs Stevenson.

The Hahndorf Community Hall is built on this site (Sub-lot 2).