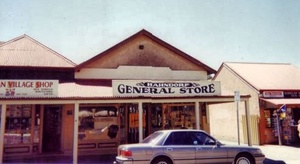 The German Village Store c2004Local Heritage Recommendations - One of the important store and residences to be established during this period was Paech’s store.  This was constructed in 1898 on the site of the town’s first hotel (The German Arms, 1839) which had been destroyed by fire in 1861, and the license transferred to the German Arms across the road.  Paech’s store has provided goods for the local community for over a century, and continues the significant commercial history of the site.  It is now know as the German Village Shop.

Statement of Heritage Value - This is a significant surviving example of a mid-19th century German xx which provides evidence of the German settlement of Hahndorf; has significant associations with the development of the town; demonstrates the pioneering German way of life, design and construction methods; and contributes to the outstanding heritage character of a town which is one of Australia’s most significant tourist attractions.

The original 'German Arms Hotel' was established as a coffee shop by Gottfried Lubasch and his second wife Anna Dorothea in 1839, the year that Lutheran refugees founded the village of Hahndorf.  At a time when all settlers were busy trying to clear the land of native bush in readiness for planting crops, this seemingly rash venture was well thought out by the 49 year-old entrepreneur.  The main track to Melbourne went past his front door and the South Australian Company hut and stockyards for spelling animals after their long journey from the eastern colonies, were directly opposite.  Until this section of land was opened up for subdivision in 1849, Hahndorf developed only on the north eastern side of the main road.  Lubasch's coffee shop stood at No 80-82 (now the site of the General Store), across the road from the current hotel at No. 69.  Gottfried Lubasch had been a Sergeant in the Prussian army and decorated at the Battle of Waterloo.

The Lubasch family enterprise quickly gained a reputation for its fresh bread, sweet fresh butter and delicious smoked bacon.  A licence to sell wine and spirits in 1839 soon added to the clientele at 'The German Arms'.  One pioneer traveller recorded in his memoirs the delights of lying on freshly mown hay in the barn, being lulled to sleep by Christmas carols wafting over the fields from the Lutheran church nearby.  As they grew up, Lubasch's six capable daughters helped to run the hotel and his other enterprises including a mail run to and from Adelaide.  By her superlative skill as a sheep shearer, Johanne Dorothea Louise attracted the attention of Lachlan MacFarlane, who became a prosperous landowner.  After marriage they built the first part of the Oakfield Hotel in Mt. Barker which was later developed into a mansion called 'Auchendarroch' by Robert Barr-Smith.  A seventh daughter came to South Australia with her husband in 1855, a year before her father died.

The S.A. Register of 4 August 1851 described the Arms as 'a small comfortable house, snug and clean, exceedingly well-conducted and more quiet than inns usually are'.  James Ide had become publican in 1849 and had kept up the well-deserved reputation until his death in 1851.  His widow married Francis Robert Hunt who took over management of the hotel.  She died in 1859.

A fire destroyed much of the original hotel building in February 1861, the year that the widower Hunt remarried.  His brother-in-law, Thomas Ide, was in charge in 1865 when the grand new hotel was completed across the road at No. 69 Main Street.

After Alfred Miller married Alma Haebich in 1899, he built the house and attached store at No 80-82.  The tiny fachwerk (half-timbered) cottage next door at No. 84 was once Podgy Post's butcher shop.  Half was demolished to make way for Shueard's Shop at No. 86.  After The German Arms was relocated over the road, the building has had many uses including a Grocery Store, a General Store and currently the FruChoc Shop. The Hahndorf Grocery Store had a long history of serving the community.

(From information compiled by Reg Butler)

Almost as old as Hahndorf itself, the German Arms has followed the town into offering tourist hospitality to the state, the nation, and increasingly, the world.  Even by 1897, 'Handlebar', a newspaper columnist recommended the hostelry to touring cyclists as 'a resting place to dream of rustic surroundings and homely country folk'.  The hotel became the first in South Australia to gain a Sunday trading licence - August 1982.  Long may the German Arms retain Dr Samuel Johnson's urbane observation:  'There is nothing which has yet been contrived by man, by which so much happiness is produced as by a good tavern or inn.' (Letter to James MacPherson 21 March 1776) 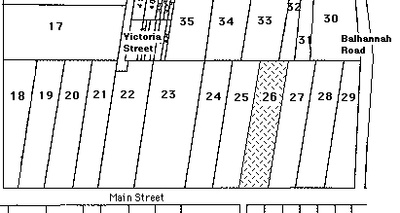 # G Lubasch built and operated the 'German Arms' between 1839-1849.  Leased the premises out after that.

% M Liebelt was the youngest child of G Lubasch.  She rented out the 'German Arms' premises to the brothers-in-law Robert Hunt and Thomas Ide.  R Hunt
shifted the hotel business across the street in 1862.

^ W Paech was the son of George Paech, of Paechtown, near Hahndorf.  W Paech became the second husband of Maria Liebelt, nee Lubasch.

* In 1968, the Education Department purchased the rear of this Sub-Lot to extend the grounds of the Hahndorf Primary School.