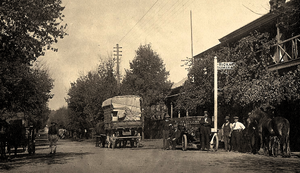 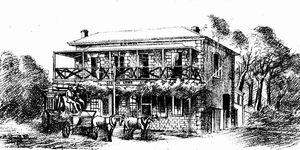 German Arms 1888  [Freason's Illustrated Adelaide News]The original German Arms Hotel was established as a small hostelry across the road (84 Main Street) in 1839, and was the first licensed hotel in Hahndorf.  The present two-storey, stone and brick building was constructed on the present site in the early 1860s, at which time the hotel business transferred to the new premises.

The German Arms Hotel was one of the buildings searched during World War I, when Hahndorf was placed under martial law.  In 1916 the hotel's name changed to Hahndorf Hotel and a year later, when Hahndorf was renamed Ambleside, it became the Ambleside Hotel.  The business reverted to its original name in 1976, following renovations. 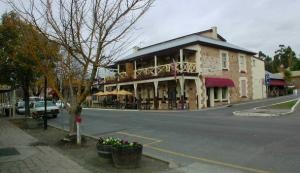 The S.A. Register of 4 August 1851 described the Arms as 'a small comfortable house, snug and clean, exceedingly well-conducted and more quiet than inns usually are'.  James Ide had become publican in 1849 and had kept up the well-deserved reputation until his death in 1851.  His widow married Francis Robert Hunt who took over management of the hotel.  She died in 1859.  A fire destroyed much of the original hotel building in February 1861, the year that the widower Hunt remarried.  His brother-in-law, Thomas Ide, was in charge in 1865 when the grand new hotel was completed across the road at No. 69 Main Street.

The new building was always alive with concerts, lectures and wedding celebrations as well as the pleasures of the bar. Brass bands entertained from the balcony.  Cobb and Co. coaches called in to deliver and pick up passengers and parcels. Police lock-up cells were built at the rear during one of Echunga's gold rushes in the 1880's.  They were demolished in the 1980's in favour of a row of modern housing units.

Lutherans were never teetotal and though the church frowned on drunkeness, Hahndorf has a long history of hotel patrons found snoring on the roadside after closing time, particularly on moonlit nights.  Because of poor street lighting, meetings held at the hotel were generally scheduled to take advantage of such heavenly cycles.  The German Arms remained the sole hotel in Hahndorf until Gottlieb Schuetze established the Australian Arms in 1854.  The names Ide and Hunt appear on lists of publicans at both hotels. 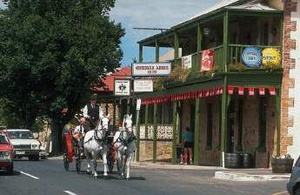 Alcohol was also a part of life at home, either homemade or purchased from the hotels or Rebensberg Winery on Schroeder Road.  One resident told Anni Luur Fox the story of a friend who sent his young son to the German Arms to buy a bottle of Port.  While crossing the Hahndorf Creek, the lad decided to rest by the waterhole to sample his purchase in secret.  One forbidden mouthful multiplied rapidly before he realised he was in deep trouble.  His father was sure to notice, but not, he figured, if he refilled the bottle from the waterhole.  He wobbled homewards carefree, smugly pleased with his brainwave.  But all was lost that evening!  The drunken tadpoles in Father's after-dinner drink gave the game away.

World War 1 affected life in Hahndorf dramatically.  While local men were busy enlisting in the Australian Army, the name 'German Arms' was removed from the hotel after it was unsuccessfully raided for guns.  People of German ancestry were considered aliens and many were rounded up for internment at Torrens Island.  The worried villagers began burying the framed Bible texts written in German that hung on their cottage walls.  They also buried paintings by Hans Heysen whose brother had been interned in a Sydney camp.

In 1914, G.C. Fellenberg changed the hotel's name to 'The Hahndorf Hotel'.  When the name 'Hahndorf' disappeared from the map with sixty-nine others of German origin by Act of Parliament in 1917, the hotel adopted the new name of the village, 'Ambleside', the name of a nearby railway station.  The original name of the hotel remained buried in a painful past that few local people would talk about.  John Storey prompted its reinstatement in 1975 when the new South Eastern Freeway contributed to the explosion of the tourism and real estate industries.  During the 1990's Noel Duffield enlarged the hotel and installed poker machines.  Having won several tourism awards and expanded the Old Mill Restaurant, he and his family turned to new challenges at the end of 1998.

Over the road where Lubasch's original hotel once stood, the Hahndorf Grocery Store also has a long history of serving the community.  After Alfred Miller married Alma Haebich in 1899, he built the house and attached store at No 80 -82.  The tiny fachwerk (half-timbered) cottage next door at No. 84 was once Podgy Post's butcher shop. Half was demolished to make way for Shueard's Shop at No. 86.  According to local artist Roy Gallasch, Mr Post was a devotee of the German Arms in later years.  He had been a superb football player. 'Strong as a bull,' said Roy, 'You couldn't knock him down with a steam engine!'

(From information compiled by Reg Butler) 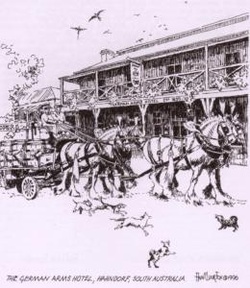 Almost as old as Hahndorf itself, the German Arms has followed the town into offering tourist hospitality to the state, the nation, and increasingly, the world.  Even by 1897, 'Handlebar', a newspaper columnist recommended the hostelry to touring cyclists as 'a resting place to dream of rustic surroundings and homely country folk' .  The hotel became the first in South Australia to gain a Sunday trading licence - August 1982.  Long may the German Arms retain Dr Samuel Johnson's urbane observation:
'There is nothing which has yet been contrived by man, by which so much happiness is produced as by a good tavern or inn.' (Letter to James MacPherson 21 March 1776)

Inhospitable World War One tensions caused difficulties both for Hahndorf and the German Arms. The hotel changed name twice:
1914 - The Hahndorf Hotel
1917 - Hotel Ambleside
Although Hahndorf regained its original name in November 1935, the German Arms had to wait until February 1976. 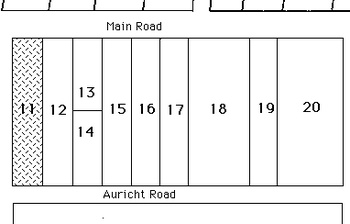