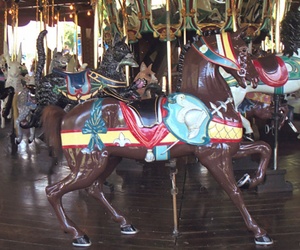 Used with permission via Jean Bennett on Google Images

The entire Carousel including building, animals, paintings, and mechanics went under restoration from 1981 to 1985. The Alamance County Service League undertook the project to hire professional furniture refinishers and artists, along with many volunteers to finish the job. At the end of the project, the entire Carousel was taken apart and the mechanical parts were checked, cleaned and/or replaced. The carousel had new jumping gears donated by the Lessona company making the machine one of the newest “Old” machines today.

Each September, Burlington City Park holds the Burlington Carousel Festival to celebrate the the Carousel. At the festival, there is lots of food, entertainment and games for the whole family to enjoy.

The Carousel is also available for school field trips and group outings from Easter until the end of the school year.