618 South Main in Ann Arbor is the address of a new apartment building development proposed by Dan Ketelaar in 2011-12. The apartment complex will replace two existing single-story commercial buildings with a six-story apartment building. The high-end, 164-unit apartment community will include 59 studio apartments, 68 one-bedroom units, 31 two-bedroom units, 6 one-bedroom duplex units featuring "warehouse"/"factory chic" design elements like brick and limestone interspersed with steel and glass. Pre-leasing is slated to begin in early 2015, and the building is slated to open in summer 2015. 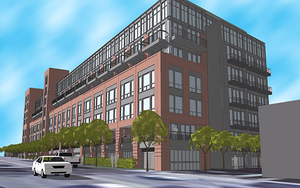 618 South Main is located in the heart of the central business, retail and entertainment districts.

Overture Audio, one of the businesses that is on the location, is relocating to West Stadium Boulevard in 2012.Construction was expected to start in July 2013, but a change of plans means the developer is now hoping to break ground in October 2013.

24 September 2015. Building Board of Appeals addresses the question of non-conforming stairways at the top floor that provide access to a loft. File 15-1193.