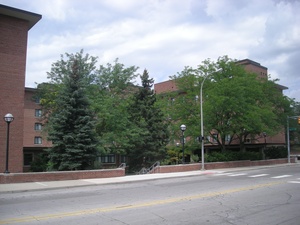 U of Michigan dorm on The Hill, housing 560 undergraduates, or up to 635 if all beds in all triples are in use.

It opened as a women's dorm in 1949, with Clair Ditchy the architect. The dorm remained all female until 1968, when the Pilot Program - now the Lloyd Hall Scholars Program - moved in.