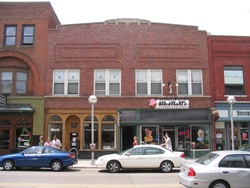 The front of the shop.

Ben & Jerry's opened a "Scoop Shop" at 304 S. State Street in early 2001(?). Right across from The Diag, it was the perfect location for an ice cream shop. The only problem was that there already was one, Stucchi's, right next door. Loyal local Stucchi's customers were outraged at this example of Hotelling's law in action, and feared that Ben & Jerry's would drive the hometown favorite out of business, but that first summer saw lines out the door at Stucchi's, while Ben & Jerry's employees looked bored. With heavy marketing to the student body, many of whom lack a long-term taste for Stucchi's, Ben & Jerry's has managed to grab some market share, but so far has not displaced Stucchi's.