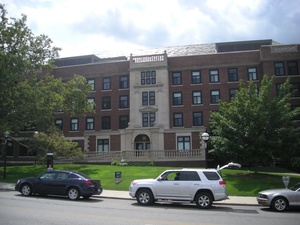 Couzens Hall is one of the Hill dorms.

James Couzens, a United States Senator from Michigan, donated the $600,000 necessary to complete the residence hall. Couzens Hall was built in 1926 to house female nursing students. The facility remained exclusively female until the '69-'70 academic year, when it became co-educational.

(2/22/2010 16:15 CP) Site improvements include: ADA accessible routes to the front door on Ann Street and from the southern doors to the Hill Dining Center. A new exit areaway from an enlarged substation at the south edge of the Couzens Hall basement level. An emergency generator at the east side of Couzens Hall, as well as direct buried chilled water lines, fire protection main, and heating hot water lines from the Mechanical Services Building to Alice Lloyd, and from Alice Lloyd to the east side of Couzens Hall. A new fire department connection is proposed at the northeast corner of Couzens, within 100 feet of an existing hydrant across Ann Street. A hydrant is proposed on the south side of Couzens, within Palmer Field, to ensure adequate hydrant coverage for both Couzens and Alice Lloyd. Many interior improvements will also be made.