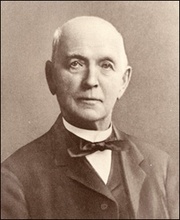 He was highly regarded - this was written when he was 87: "Mr. Quirk, however, is an instance of a man who has achieved success without paying the price at which it is so often bought, for his prosperity has not removed him farther from his fellowmen but has brought him into nearer and more intimate relations to them. The more means he has had, the more he has done for those around him."

Quirk's family immigrated from the Isle of Man to Rochester, Monroe County, New York in 1827. He eventually apprenticed to a carpenter and joiner, Fitch Hill, and following Hill to Ann Arbor. For some years, he worked in Ann Arbor, Lodi, and Belleville, as well as serving as Auditor of Wayne County and Postmaster of Belleville from 1852-1854.

In 1853, Quirk entered the employ of the Chicago, Burlington, and Quincy Railroad. From 1855-1859, he lived and invested in various Iowa and Illinois towns, generally in the grain commission business. In 1859, in Chicago, he met Asa Dow, and the two formed Dow, Quirk & Company.

In 1860 or 1863, Quirk moved to Ypsilanti "in order to offer his children better educational privileges." There, he organized the First National Bank, the first incorporated bank in Washtenaw County. in 1863, serving as President of the Bank from 1885 until at least 1906.

He built woolen mills in 1865, founded the Peninsular Paper Company in 1867, and was instrumental in the construction of the Wabash Railroad from Detroit to Butler, IN., the Lake Shore Railroad, from Ypsilanti to Hillsdale, and the Ypsi-Ann interurban.

He returned to Chicago in the 1874s, investing the meatpacking industry, later working in that same industry in East St. Louis, Ill., in 1880-1885.

Quirk was born on the Isle of Man, to Hugh Quirk, a farmer, and Ann Lace, daughter of an Episcopal clergyman. Quirk was one of 11 children - John, William, Evan, James, Dan (died in infancy), Eleanor, Daniel, Phillip, Matthew, Thomas, and George.

Beakes provides an impressively deep ancestry for Quirk, stating that "his life began ... at the country place of Ballachrink, near Peel, on the Isle of Man. This was the ancestral home of the family through many generations." (Beakes looks back as far as John McQuirk, in 1515.)