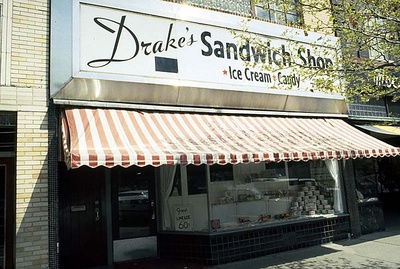 You used to be able to get all kinds of sandwiches here, and a limeade to chase it down. It was owned by Truman Tibbals, who purchased it from the previous owner in 1929 after working there for several years.

Drake's was on North University between State Street and Thayer Street.

A photo from the Bentley Image Bank.

The third thing? “I worked at Drake’s,” she says of the legendary sandwich shop on North University, where she served—and ate—milkshakes and fried pecan rolls. “The weight that I gained at Drake’s,” she laughs, “definitely helped to launch my career as a cartoonist.”

Mr. Tibbals died in 1994. Before he died, he was made an honorary Ann Arbor police officer. He was a great guy and a great friend of the Ann Arbor Police Department.