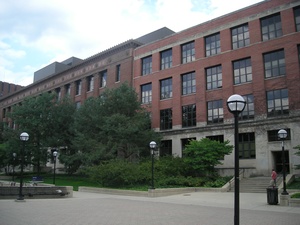 Two buildings have been called East Hall on the University of Michigan Central Campus.

The 1883 structure, originally built as Tappan School, was acquired by the University in 1922. It was subsequently torn down.

The East Engineering building, currently known as East Hall, was built in 1923 directly south of East Hall. It is located at 530 Church Street, though the main entrance is on the pedestrian mall that used to be East University.