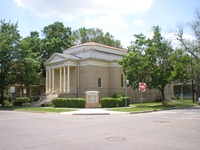 The Christian Science was founded in the 19th Century by Mary Baker Eddy after the publication of her book in 1875. Followers of Eddy’s beliefs began meeting to share and discuss healing results. In 1879, the First Church of Christ, Scientist (The Mother Church) in Boston, Massachusetts was established. In 1914, the Christian Science Society of Ypsilanti obtained a charter and became recognized as a branch of The Mother Church, under the name of First Church of Christ, Scientist in Ypsilanti. One year later, the congregation began gathering at the Ladies Literary Club House. After changing to several locations, the congregation began construction for a church edifice on the lot at 123 N. Adams Street in 1928. The doors opened for service on October 28 that same year. For over 65 years the church housed the First Church of Christ, Scientist Congregation until they moved to another facility. In January of 2000, the building became the new home for the three year old congregation, Ekklesia Fellowship Ministries. Today, the building stands vacant. 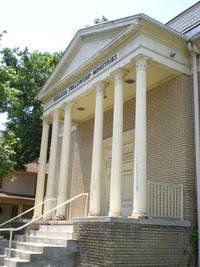 The main entrance to the church is located on the east side of the 0.2 acre lot. The double door entrance is framed with a portico set on a podium with stairs. Inside, the sanctuary has theater seating with an area of 46 ft. by 43 ft. The seating currently accommodates 140, but could be expanded to approximated 200. The sanctuary is located at the center of the building; the fellowship hall is in the lower level with classrooms on both floors, and three offices on the main floor (7,536sq.ft.). The church has a working pipe organ. The building is currently not ADA accessible, although a ramp could be easily added to the north or south door. 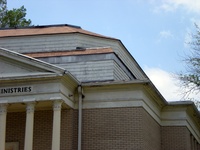 The Neo-Classical Revivals were eclectic combinations of elements from Greek and Roman orders, symmetrically arranged, derived from design principles advocated by the Ecole-des-Beaux-Arts in Paris. It represented an appearance of strength and stability. Thus, the style became the traditional design of choice for banks, museums, government buildings and institutions of learning in the USA. According to the Ypsilanti Heritage Foundation, this was the prevalent style in Ypsilanti during 1890-1920’s. 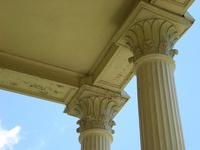 Although the First Church of Christ, Scientist was erected 1928, it is clear that the architectural design choice was a moderate variation of Greek and Roman Classical elements. As is common of the style, the building’s basic geometry is a one story rectangular block capped with a flat parapet accentuated with cornices, and clad in sand colored bricks throughout. Approaching the building from the east side, six Greek Neo-Classical steel columns raise to hold an, ivory painted, wood and stucco pediment, forming a reverent portico that frames the entrance into the sanctuary of the church. The ornamented steel columns present a variation of a Corinthian column, with simplified volute ornamentation on its capital. The windows are oriented vertically, typical of the style, with yellow stained glass on the sanctuary section of the building to heighten the divine experience of the space.

The building was declared Historic Structure by the Ypsilanti Heritage Foundation, and today stands vacant and in danger of abandonment. Nonetheless, this church is a beautiful example of Ypsilanti’s architectural history and the voice of the epoch.