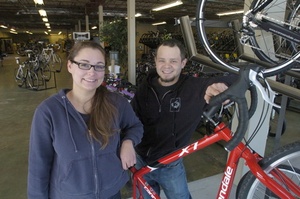 The business was originally founded by Hank Bednarz in the 1970s. Over the years it has been housed in several locations, including in a building at Boulevard Plaza (2107 W. Stadium), and the former Ace Barnes Hardware building at 2015 W. Stadium.

2014: The Bustos's buy the former Discount Tire building at 2270 W. Stadium and move their business into it after extensive remodeling.

2006: Lindsay and Oscar Bustos buy the business from Hank Bednarz. At that time it's located in a building at the back of the the back of Boulevard Plaza (where Arbor Farms and Ace Barnes Hardware are located) at 2107 W. Stadium.